There has been rumours that since the estranged couple managed to work together in a movie, there is a possibility that they would reconcile and start living as husband and wife for the sake of their kids. 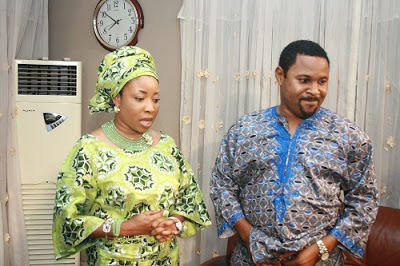 But Saidi Balogun dropped the bombshell in a chat with Encomium, declaring that he was not ready to reconcile with his ex-wife, Fathia, and as a matter of fact, they will never talk again for life.

The popular actor is angry, he said he and Fathia have not communicated in over 8 years:

“People don’t understand what’s really going on between us. I believe that’s why they are peddling the rumour. There is no logic in it at all.

“I think it’s because they saw us in Mercy Aigbe’s new movie, Life After Marriage, that’s why they imagined we’re back in love. The marketer of the movie only used Fathia and myself to promote the movie. And so far people saw the two of us in the movie, they started peddling the rumour that the movie was meant to reconcile us.

“The funniest thing is that we didn’t act together on the set of the movie. We didn’t even see each other for once. I acted my role separately, she also did hers separately. Our paths didn’t cross at all…

“On the set of Life After Marriage till the production ended. So, I don’t know how people arrived at the conclusion that we have reconciled. After how many years? That’s a big joke.”Asked if they have started communicating with each other as being bandied, he reacted,

“There is nothing like that, my brother. On what basis will that communication be? To be honest, the last time we spoke was 2006. I have since moved on. I thank God for that. We don’t have any reason to talk to each other. It can’t happen at all.”

You may wish to know that the couple had two children, Khalid and Halia, before breaking up.