Share on FacebookShare on Twitter
With so many problems in our great country Nigeria, ranging from insecurity, health scare, unemployment, corruption and many others, the delegates have found time out of their “not-so busy schedule” to further increase the division and tribalise our nation by the addition of new states and production of the new map of Nigeria…

As a follow up to their July 3rd recommendation for 18 additional states to be created to bring the number of states in Nigeria to 54, members of the National conference Committee on Political Restructuring and Forms of Government jointly headed by Ike Nwachukwu & Mohammed Kumalia have released a copy of the proposed a new map of Nigeria with the additional states added. (pictured above). Continue to see the newly approved states as seen on the map… 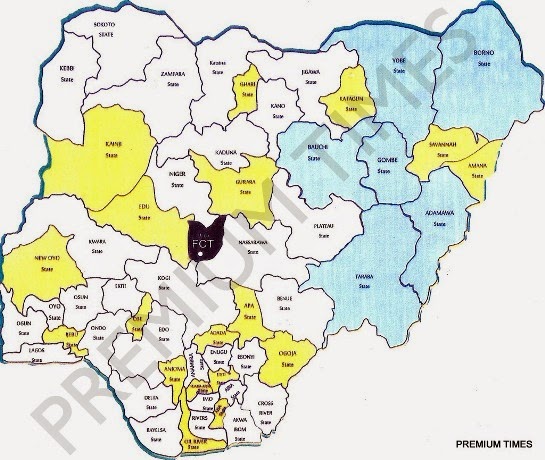 Apa from Benue,
Edu from Niger
Kainji from Kebbi state
Katagum from Bauchi,
Savannah from Borno,
Amana from Adamawa,
Gurara from Kaduna,
Ghari from Kano,
Etiti from South East,
Aba from Abia,
Adada from Enugu,
Njaba from Anambra and Imo,
Oil River from Rivers state
Anioma from Delta state,
Ogoja from Cross River State
Ijebu from Ogun State
Ose state from Edo
New Oyo State from the present Oyo State
The closing ceremony for the CONFAB will take place tomorrow August 21st where the final report adopted by the delegates on all matters discussed will be handed to President Jonathan for consideration and approval. I hope president Jonathan ignores this proposed bill of additional states…