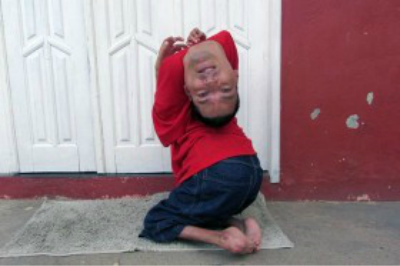 Photos of man born with his head upside down – Claudio Vieira de Oliveira born with serious physical disabilities never allowed his condition to prevail over the strength of spirit.

The 37-year-old man has his neck folded back on itself, his legs are badly deformed and he can hardly use his hands. As the baby came to this world, it was not warmly welcomed by the medics, who advised his mother to stop feeding him because he would not survive. Maria Jose narrated to The Mirror:

“People started saying ‘the baby is going to die’ because he could barely breathe when he was born. Some people would say: ‘Don’t feed him, he is already dying’. But there’s only happiness now. Claudio is just like any other person – that’s how he was raised in this house. We never tried to fix him and always wanted him to do the normal things everyone else does. That’s why he is so confident. He is not ashamed of walking around in the street – he sings and he dances.”

However the Brazilian not only survived but having overcome the disadvantages associated with his state, graduated as an accountant and became an inspirational public speaker.

Speaking about his life, Claudio does not seem to be the one who complains about the hardships:

“Since I was a child I’ve always liked to keep myself busy and work – I don’t like to depend totally on other people. I do a bit of accounting, research for clients and consulting. “I have learned to turn on the TV, pick up my cell phone, turn on the radio, use the internet, my computer – I do it all by myself.”

Claudio’s determined independence brought its fruits: he successfully finished school and graduated from the State University of Feira de Santana.

At the age of eight Claudio made his first steps, and not metaphorically: before that he had been carried everywhere, and  at 8 he stated walking on his knees. So his parents adjusted the house for the boy to be able to move around independently. They changed the floors, positioned his bed, plugs and lights lower, thus he could move by himself, without asking for help.

Claudio, who cannot use a wheelchair because of the unusual shape, told the journalists:

“Throughout my life I was able to adapt my body to the world. Right now, I don’t see myself as being different. I am a normal person. I don’t see things upside-down. This is one of the things I always talk about in my interventions as a public speaker. Nowadays it’s much easier to deal with the public, I’m not afraid of it anymore and I can say that I am a professional, international public speaker and that I receive invitations from all over the world.”

Claudio proved with his attitude towards life that a Great Man could achieve great results and might inspire with his example the younger people suffering from rare disadvantages.

A week ago we reported about a 8-year-old Indian boy Kaleem who has giant hands, which is caused by some rare unknown condition.

The boy is unable to carry out simple tasks, including tying his own shoe laces, feeding himself etc.

Generally, Kaleem is in good physical state as his lungs and heart are properly functioning, however he experiences great social pressure and was forced to leave school over bullying.

This is proof that Yvonne Nelson & John Dumelo might just be having fun around but ain’t dating!