On Saturday, September 20, 2014 at the Rhapsodys, Victoria Island, Lagos, a gig was held to celebrate the debut album of fast rising act, Dammy Krane but surprisingly, his big brother and mentor, 2face Idibia was conspicuously MIA. Fans and friends who had attended the event and were expectant of 2face’s presence had their hopes dashed as the pop legend didn’t show up neither was any explanation given about his absence. 411vibes discovered that even Efe Omoregbe, co-founder of 960 Music Group and label exec at Hypertek Digital, Dammy Krane’s management team and record label, didn’t stay for more than an hour before leaving the venue. 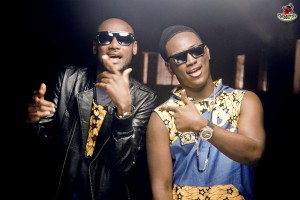 What was more surprising was the presence of MAVIN songstress, Tiwa Savage who like 2face had attended and performed at the wedding of Florence Ita Giwa’s daughter earlier that evening, but still showed up at the event and stayed for well over three hours. The event however turned out well with Dammy Krane letting out his emotional side even as he partied with Pasuma, Praiz, Spellz, Olisa Adibua and others who had come to honour him..