On Sunday, two days after it was reported that Anita Oyakhilome had filed for divorce, Christ Embassy deleted her pictures and personal information from its official website, www.christembassy.org.

I am not dead, I was critically ill but I am still alive…

Many describe the action as the beginning of a process to shut her out of the church, after she accused her husband of “adultery” and “unreasonable behaviours” in a divorce suit filed in London last April but only made public on Friday. 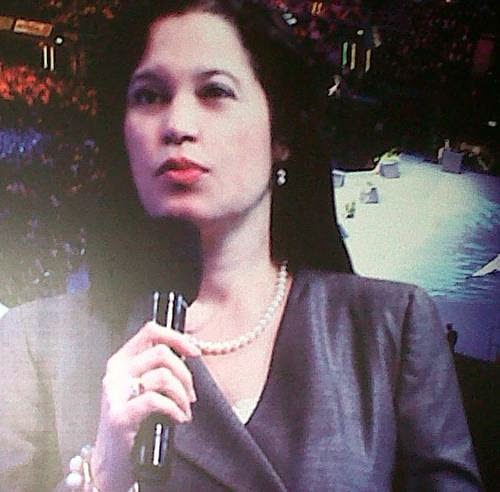 Christ Embassy’s new website now shows only Pastor Chris Oyakhilome, with a broad smile welcoming his followers to the month of August, and tagging it, ‘Month of Praise’.

In the message on the website, Oyakhilome also urges his followers to “rejoice for the joy of the Lord is your strength.”

Also, on the website of the Rhapsody of Realities, a daily devotional co-authored by the esrtwhile couple, there’s nothing to show that Anita is still recognised as the only visible face on the website among the family members is that of her husband.

It was too early to know if the September edition of the Rhapsody of Realities still has the photographs of both the pastor and his wife as it used to be.

In the past, when the going was good, Anita and Chris Oyakhilome held hands on the church website and smiled broadly. They projected the image of a perfect couple.

But P.M.NEWS checks at the weekend revealed that there is confusion in the church following the divorce suit filed by Anita to end her over two decades marriage to the founder of Christ Embassy Church.

In the past, Pastor Chris headed the Nigerian branch of the church, though he travelled to other branches occasionally, while Anita headed the branch in London and its environs.

Christ Embassy and its founder have been embroiled in a myriad of controversies in the past. In 2010, Oyakhilome was accused of engineering a money laundering scheme in Nigeria, and questions swirled around his finances because of his glamorous lifestyle.

Many pastors and theologians also excoriated Oyakhilome for his “New Creation” doctrine—a form of gnosticism that says after a person becomes a Christian, any sin they commit is only in the body and will not affect the spirit.

In 2008, Oyakhilome’s reputation as a faith healer was tarnished badly in Johannesburg, South Africa, when a man told a Soweto newspaper that Christ Embassy offered him more than $1,200 to sit in a wheelchair and pretend to be crippled until Oyakhilome prayed for him.

“The man went to the media instead of taking the money, sparking concerns that healings were being faked to impress growing crowds,” said Lee Grady in an article in 2012 published by Charisma Magazine.

Pastor Chris Oyakhilome has also been a target of criticism by the Treatment Action Campaign for his support of faith healing to cure HIV.

Allegations that Christ Embassy members are reportedly being forced to give huge sums of money in offerings with the biggest donors receiving the biggest awards have left many people concerned.

Many Nigerians have also alleged that the church operates like a cult and pressures members to marry only within Christ Embassy.

Many people also remember the scandal involving Christ Embassy and Sheraton Hotel some years ago when a member of the church, who worked at the Sheraton Hotel, stole money from his employers and gave it to Christ Embassy. But when Sheraton approached the church for reimbursement, the church allegedly claimed that the money had been given to God and could not be refunded.

Many also excoriated Pastor Chris some years ago when the church began collecting gate fees from members for their New Year Eve’s Service.

But the latest scandal involving Anita and Chris, who have two daughters, seems to threaten the very existence of one of the biggest churches in Nigeria.

Christ Embassy runs several arms including the Healing School, Rhapsody of Realities, and an N.G.O called the Innercity Missions as well as three Christian television channels: LoveWorld TV, LoveWorld SAT and LoveWorld Plus.

The church is scattered all over the world, including in the United Kingdom, the United States, South America and the whole of Europe.

Stories about women bringing men of God down are not new. In 1988, Jimmy Swaggart, a famous American preacher was implicated in a sex scandal involving a prostitute that resulted initially in his suspension, and ultimately defrocking, by the Assemblies of God.

Three years later, Swaggart was implicated in another scandal involving a prostitute. As a result, Swaggart’s ministry became non-affiliated, non-denominational and significantly smaller than it was before the scandals.