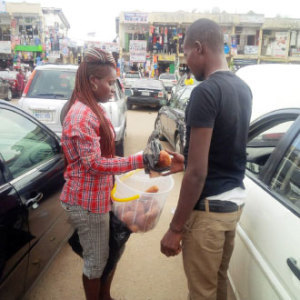 This a story of a noble Abuja-based girl Anna James, whose life changed for the better overnight.

It all started with a report in Leadership newspaper, telling about the girl selling snacks in Utako market of the country capital. Anna was struggling for survival and at the same time was saving up money to make her dream come true: to become a microbiology student at the university.

The 22-year-old girl preferred to follow the path of honor by working hard no matter how humble the starting point was. The beautiful female did not consider the way of degradation, taking poverty as an excuse.

After several failed attempts to find a job, the girl engaged into making snacks by herself and selling them, for which she first borrowed N10, 000 as a start capital. Doing all by herself, Anna had only several hours for sleep per day to keep the business afloat.

Regarding her earnings, the young hard worker managed to save up to N 18,000 monthly, which amount she deposited in a bank. By saving money Anna wanted to continue education and to be able to support her parents, both suffering from bad health conditions.

Accepting life as it is, the girl refused to search for “easy money” saying:

“I will never sell my body for any favour. If that’s what it has to take to make it, I can’t do it and that is why I started this small business.”

When asked to give advice to her peers experiencing hardships, Anna recommended them to understand the value of dignity in labour and create legal job opportunities for themselves.

Fortune smiled at Anna James through the director general of National Orientation Agency (NOA) Omeri Mike, who could not stay indifferent to her story.

Impressed the girl’s attitude, Omeri decided to honour Anna for portraying the value of dignity in labour.

At the occasion dedicated to celebration of the award recently granted to him by President Goodluck Jonathan, Omeri spoke about Anna recognizing her achievement at the hearing of the dignitaries who graced the event.

He donated N200,000 to Anna for her to go back to school. Additionally, the Minister of State for Power Alhaji Mohammed Wakil contributed to the donation with N300,000 amount, two more people donated N200,000 and N300,000, making the total sum of one million naira.

The girl received a call a week after her initial story had been published, she was invited to attend a function as a special guest to the DG-NOA, where she confessed she was treated like a special guest.

Upon hearing about honours and the donations, Anna could not control her emotions and she kept praying that God would bless Omeri and all those who helped to make her dream come true.