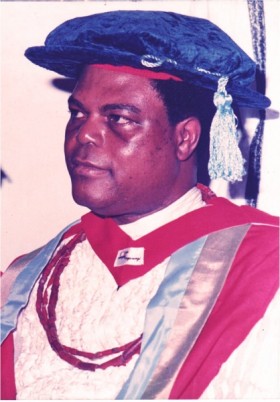 To destroy the myth that one can’t be successful without higher education we pick up list of some of the most successful Nigerians that did not attend university or even complete schooling experiences..See them below.. Folorunsho Alakija is ranked by Forbes as the richest woman in Nigeria with an estimated net worth of $2.5 billion. The beautiful woman recently revealed that she never attended a university. She made this revelation at the United Nations International Youth Day held at the University of Lagos Orji Uzor Kalu is the chairman of SLOK Holding and the Daily Sun and New Telegraph newspapers in Nigeria. He was excluded from the University of Maiduguri because of participating in a students’ protest.And Orji Uzor Kalu decided not to continue his further education and started his career. The founder of Eleganza Group, which has a marketing span across West Africa, Razaq Akanni Okoya had his only formal education at Ansar-un-deen primary School, Oke popo, Lagos. This did not prevent him from becoming a Nigerian billionaire industrialist. African billionaire Cosmos Maduka dropped out of elementary school and became an apprentice at an age of seven, because of his father’s death. Currently he is the sole distributor for BMW and Ford cars in Nigeria and West Africa. The name of this man, perhaps, is not very familiar. But his transportation company “The Young Shall Grow Motors” is well-known. Vincent Obianobo had not much education but today, he is one of Nigeria’s most successful businessmen. Michael Ibru has only a school certificate to his name. The founder of Ibru Organization, one of the largest conglomerates in Nigeria, finished Igbobi college in 1951. Ibru is also the head of the richest family in Nigeria. Michael Collins Ajere better known as Don Jazzy is one of the famous Nigerians, who didn’t need education to achieve success. The prolific music producer and C.E.O of Mavin Records dropped out of Ambrose Ali University, Ekpoma in his first year.

One of the highest paid actresses in Nollywood Mercy Johnson Okojie discloses that she got into the Nigerian movie industry because she failed her Jamb exam. Now she is possibly one of the most popular actresses in Nigeria.

UNBELIEVABLE ! See What Akon Did To Avoid Ebola During Performance [ PHOTOS ]

REVEALED ! The Real Reason Tiwa Savage Fired Teebillz as her Manager – You need to see this [ LOOK ]