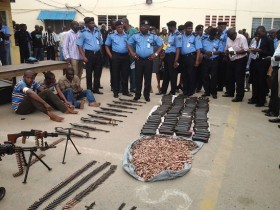 At a time when the Federal Government is waging war against all acts of terrorism across Nigeria, the Police in Nnewi, Anambra state, eastern Nigeria, has announced that it recovered arms and ammunition from an uncompleted building.

According to a report published by Vanguard, the discovery was made on Sunday, 5 October, 2014 at an uncompleted estate owned by an overseas-based businessman at Uruagu Nnewi.

Nigerian man gifts his bride a brand new car at their… Among arms and ammunition recovered from the building include one AK4, Military rifle, handcuffs, 1,500 live ammunition and 30 fully loaded magazines.

It was gathered that the arm cache and others were recovered following a tip-off.As at the time of compiling this report, the police says it is still investigating to know those behind the act.

Also, the police uncovered a criminal hideout in Nnewi after a search on an erosion site in Nnewi North Council Area Anambra State.

Details of the development is still expected.

It was gathered that a woman, popularly known as nurse, who ran the home and her agent were arrested during the raid.

The criminal activities was uncovered after one of the pregnant girls was allegedly delivered of a baby boy but was dispossessed of the baby, a source told newsmen.

She was said to have raised the alarm when she could not stomach the disappearance of her new born baby.

However, investigation revealed that the baby was later recovered from the owner of the home by security operatives and handed over to the mother.