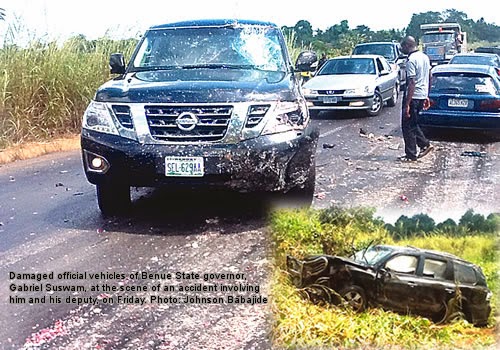 Share
According to a report on Tribune, Benue state Governor Gabriel Suswam and his deputy, Steven Lawani, were involved in a ghastly road accident yesterday Friday November 14th. The accident occurred at Angbaaye, near Makurdi, after another vehicle lost control, somersaulted and hit 2 vehicles in the Governor’s convoy. Fortunately no one died but 8 people were injured. The governor and his deputy who were in the same vehicle and were on their way to flag off a road project in Wannune, Tarka LGA and Gboko were uninjured.

The 8 people who were injured, mostly from the car that hit the governor’s convoy were rushed to the hospital in Makurdi. The governor is reported to have helped in the rescue mission.

Revealed: Kanye West had a three-some with Kim K and Amber Rose (Details)

Ini Edo shows off her parents on instagram, her mum is BEAUTIFUL.. (See Photo)