Owner of SaharaReporters, Sowore exposes PDP and Jonathan? – You need to see this! 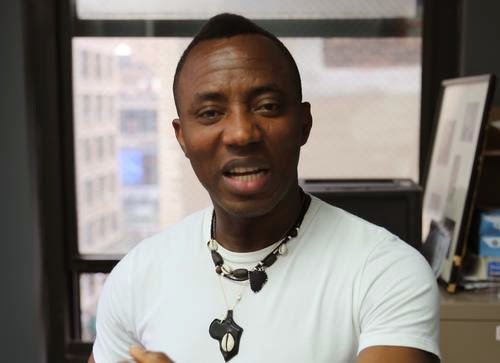 Share
The founder and publisher of Sahara Reporters Omoyele Sowore has reacted to reports that he got a $5million mansion located in Atherton, California, from the APC. Reacting to the report which claimed that the mansion is one of the many promises made to Sowore by APC and has… “…Everything a modern home should have like swimming pool; grand hall, with 15-foot ceilings and marble floors, ideal for dancing; French doors opening to the veranda; dining room with a rouge royale marble fireplace; stained glass windows and a crystal 12-branch chandelier; Red-carpeted double mahogany stairway, complemented by a foliate motif stained glass window on the landing; Wrap-around veranda available for seasonal use and Ample covered or outdoor parking.

Sowore accused the presidency of being behind the story and asked president Jonathan to show the world proof that he was given a mansion by APC. See his reaction as posted on SR after the cut

By Sowore, publisher of Sahara Reporters

In the latest of many attempts at blackmailing SaharaReporters into silence, a new (what else?) website has concocted the story that the All Progressives Congress (APC) bought and gave me a mansion located in Atherton, California.

Everyone around the world knows that Nigerian governments since 2006 have been trying to shut down or shut up SaharaReporters. Technical efforts to shut us down occur almost every week. Efforts to shut us up are no less prevalent, and they include blackmail from various directions.

The Atherton mansion claim, which was apparently written by some handlers of President Goodluck Jonathan, followed renewed attacks on the site infrastructure during the summer. The well-oiled and well-heeled team sent bots after our server and crippled it for several days. Shortly after we restored our services, that criminal team went on Facebook to create several fake fan pages in our name.  It was only three weeks ago that we succeeded in getting Facebook to take down the biggest of those fan pages; by that time, it had garnered over 14,000 likes.

In this latest attempt, Mr. Jonathan’s hit squad seems to have gone berserk over an online poll conducted by SaharaReporters, which showed that he would be defeated by 75% if retired General Muhammad Buhari, was pitched against him in the 2015 general election.

Following Mr. Jonathan’s declaration of intent earlier this week, our team of reporters also reported that a team affiliated with the Nigerian ruler refused to pay several persons who had been hired to pose as supporters during his presidential declaration in Abuja. The presidency seems widely embarrassed at the report that hordes of those in attendance at what was supposed to be a massively-supported declaration had in fact been hoodwinked by his Transformation Ambassadors of Nigeria (TAN).

These reports and many others unveil the government as tactless, clueless and corrupt, but that is only because it is tactless, clueless and corrupt.  They are not manufactured, and unlike some others, we have refused to be bought off the task of reporting what we know.
The truth is that my team and I are beyond bribery machineries.  Mr. Jonathan’s foot soldiers, who have repeatedly been sent to meet with us individually with the promise of huge bribes can attest to this.  For those amazed by the latest gossip about the $5m mansion bribe in the United States, I challenge the writers to publicly provide the verifiable address of the mansion in Atherton.  They should also go ahead and publish the real estate documents that are associated with the property, so that we can put the matter in the hands of the law-enforcement authorities.
But we all know the truth: desperation.

It is desperation that is responsible for the concoction of this $5 million mansion story, the objective of which is to fool the simple-minded.  And we understand: the 2015 elections are approaching.  Time to buy off—or discourage—critics and unfavorable reporting.

But we at SaharaReporters are not fickle fighters. Nobody gave us a $5m home in 2009 when we were at the hub of relentlessly reporting on the cabal in Abuja that was preventing the Vice-President of Nigeria from taking office when his boss was sick.

That VP was Goodluck Jonathan, and that is how he became president.  We reported only as we saw fit, because we hold the constitution and the democracy of Nigeria to be superior to any Nigerian, including the President.  When Mr. Jonathan became Acting President, and then President, we did not expect him to thank us either, even though he sent one of his aides with loads of cash to New York on a “thank you” tour.

We refused to meet with them on that occasion and reminded them that we were merely doing our duty in defense of Nigeria and her people.

It was not personal at that time. It is not personal today.
That is why I again assure all supporters, readers and fans of the multimedia platform known as Sahara Reporters Media that we will continue to expose the rot that is perpetuated and perpetrated by the Jonathan government as long as that character does not change.  It is not personal.

Blackmail will not deter us from doing right by our people.  And neither phantom mansions nor private jets loaded with dollar bills can buy us off this duty.

Ini Edo shows off her parents on instagram, her mum is BEAUTIFUL.. (See Photo)

Kanye and Kim put the new mansion they just bought up for sale, Trouble in paradise? (Details)