Just In: Buhari’s lawyer decamps to PDP exposing all the evil plots of APC to win 2015 Presidential election (Must See) 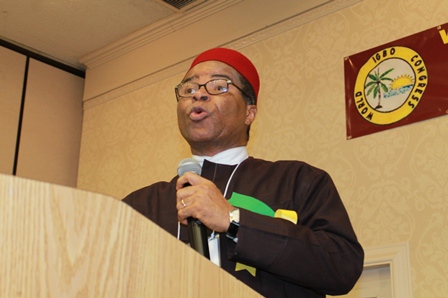 Mike Ahamba, a Senior Advocate of Nigeria (SAN) and lawyer to the All progressives Congress (APC) presidential candidate, General Muhammadu Buhari has decamped from the opposition party to the ruling Peoples Democratic Party (PDP).

His official statement of defection was made public on Wednesday, January 28, 2015.

Ahamba revealed that hen decided to dump the APC because the party was bedeviled with much dishonesty and absence of transparency, further availing that the sitting governors who joined the party (APC) were invited over for the sole aim of siphoning their state funds for the electioneering campaigns.

Read the full text of Ahamba’s statement below:

My brothers, sisters, friends and supporters, I salute you.

It is a fact now self-evident that I am involved in a political re-alignment and movement that has necessarily resulted in my return to the Peoples Democratic Party (PDP) of which I was a pioneer member, having abandoned the sinking APC political ship which has proved soon to be a political ‘Titanic’. The merger of three national political parties, a first in the history of Nigeria, had been full of hope with promises of change. But the center could not hold, things have fallen apart, and no one in the party is at ease any longer?

Brethren, I have bailed out of that ship because I find myself unable to continue with membership of a party which

(a) places preferred runners in a 100 metres race at the sixtieth metre point in a supposed democratic setting leaving others at the starting blocks,

(b) has not published its manifesto after more than eight (8) months of existence, thereby keeping its membership and the polity in a blindfold as to its true objectives,

(c) has not been able to set up elected administrative structures at any level more than eight months after registration but, instead, is developing a sit-tight syndrome in the interim officers,

(d) invites governors into its fold for the purpose of using them to secure funds for election purposes, which funds would naturally be the product of looting of the respective state treasuries,

(e) has manifested lack of concern for the well being of the generality of the society, particularly the less privileged, by directing its members in the National Assembly to block the national budget, a directive that could never be justified,

to mention a few reasons,
I have therefore opted to return to my original political platform the PDP which till date has not be parochialised either ethnically or religiously.

I firmly believe that this platform is, in the Nigerian situation, the best avenue of political service to my people and the nation at large.

I assure my numerous supporters and admirers that change of platform will not transform into a change of the personality you ever admired in me, and crave your understanding and support. I remain committed to justice to all, at all times, at all cost.

As I declare my membership of the PDP on Saturday 22nd February, 2014 my major request of you is your earnest prayers for me to continue to be who I have been. May I also request your support in welcoming Mr. President, Dr. Goodluck Ebele Jonathan to this epoc event.

In God I trust.
God bless you all, and our Great country.
Chief Mike Ikenna Ahamba KSC, SAN.