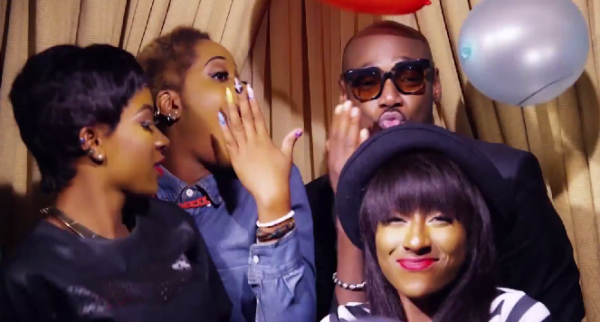 Unknown to many Tuface and Pero Adeniyi the mother of his three kids have been in touch despite the fact that Tuface married Annie when Pero had just brought to bed his 6th child,their third together.

My source whispers that they are very very Good friends – for the sake of the children they have together…..
It is also whispered that Tuface is a lover of his kids and makes sure that all his Children from the three woman (Sunmbo,Pero and Annie) have contact with one another and he does not fail in his duty as Father to all his seven kids.

Anytime he is in America,he visits Pero and his kids and spends time with them but this does not go down well with his wife Annie Macualay.

According to insiders, ”Annie has been fighting Pero to stay away from Tuface and she does not want him to have any contact whatsoever with pero or the kids she had for him but the musician has turned a blind eye to her plea and this results in constant fights between them,forget all the instagram display you see”.
This kissing picture and others that looked cosy of Tuface and Pero together was ALLEGEDLY taken at Rumours nightclub on Sunday night of January 26,2015.
My source squeals further ”I dont know if they planned to meet there or it was a coincidence but Pero and Tuface were at the club together and Annie stormed in ready for a fight,infact she was ready to tear down the place because Tuface had not been home for days due to another bout of nagging on the pero issue.
Pero and Tuface were seated at the VIP section all cosy and laughing and having the time of their lives and when Annie stormed in,the club management sensed trouble and asked her to come with them into a room so that Tuface could join her there and talk things out.
But when Annie went into the room,she was locked in for some time and by the time she was let out,the fun was over and Pero had left whilst Tuface was about to leave.
The kissing pic you see up there (or down further depending on where you eyes are situated) was snapped when Annie was locked in…”

Sources claim that all is not well between Tuface and Annie because the frequent fight over Pero has taken a toll on their marriage and got worse when
Annie allegedly sent threatening mails to Pero and wouldnt let her be to the embarassment of her hubby.

let me explain it further exactly as it was recounted ”Anytime Annie and tuface quarelled,she blamed it on Pero and vented out her anger via phone calls or strongly worded emails cussing out Pero and calling her kids names…”

Sources claim that Pero who is currently in Nigeria on a business trip is not romantically entangled with Tuface in any way and has moved on with her love life but that the two are however best of friends.

The story i have told is the version recounted by olofofos,there is definitely another version and this space is available to run it in the spirit of fair play.

Watch how this mortuary attendant sleep with dead bodies, claiming no girl wants him due to his job (Video)