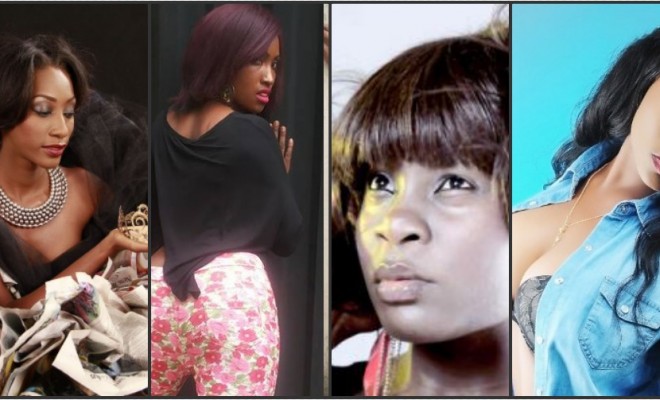 These Nigerian celebrities are virg-ins and they are proud of their virg-in status and they don’t hesitate to tell anybody who cares that they are still virg-ins. Check them out.

Nigerian singer, Adokiye has always maintained that she is still a vir-gin and a proud one at that. She made headlines when she offered her virgin-ity to Boko Haram in exchange of the Chibok abducted girls. The Beautiful and provocative singer, Adokiye Kyrian,who only turned 23 few months ago, in a recent interview opened up about her virgin-ity. Talking about love, singer Adokiye, who is also UN ambassador of Peace, tried to explain why she doesn’t believe in love.Adokiye said: “I really don’t like love. I’m a career person, what I have for everyone including guys, is Agape love.

Love is wicked and there is no real love, I’m young and living the life. Until I see one, I’m happy like this.” When the singer was asked about being cheated by love, she said: “Frankly, no.” But she continued that she has seen enough of fake love around her to be cautious to whom she gives her heart. She stated that she is in a relationship with her career, that architecture is her husband and music/­movie her boyfriend. The rising star confessed that she does not understand why a young girl would need sex, also adding that she is still a virg-in.

The Love You Better and Kulumo crooner further said that “any man that buys her mum the private jet wins her heart.” 27 year Old Annabella is a product of AMBO reality TV show and she tells whoever cares to listen that her virgin-ity is still intact despite massive intimate harassment in the movie industry. The Adamawa State-born actress even boasts that nothing would make her lose her virgin-ity to another man except her husband. Read Excepts Of her interview.

Have you been heartbroken before?

Heartbreak is something that has to do with an individual, if you think your heart can be broken then it can be broken. When did you start dating? I started dating when I was 23-years-old, but it was a queen relationship. It`s not something based on mundane things and all that, it was just a matured relationship but I am not going to say much about it.

Did the relationship last for so long?

Not really long. Did you have sex during the relationship? I am still a virg-in. I lost my guy to the cold hands of death but recently I found someone else and we are getting married soon.

How were you able to overcome intimate urge while in the university?

(Laughs) Listen, my dad taught us good morals. My father is an army officer, so I fear him a lot. In fact, I respect him a lot. He is not everywhere but he keeps his eyes on us. Even when I went abroad, he was not there but I didn’t misbehave. While I was in the hostel he was not there with me but the good morals he taught us have kept me till date.

As a virg-in, how were you able to cope with temptations here and there?

Actually, that side of me is dead until I get married. Aside avoiding pre-marital sex, I am also a born again Christian and I fear God a lot. I can remember while we were growing up we had that lesson about sexually transmitted diseases and the fear of all those things really kept me away from sex. So, if I must have a relationship we must enter into agreement of no sex. It has to be a smooth relationship but if you feel you can’t wait and you’re so much in a hurry or your body is inching you, then propose. I have all those things in mind but thank God I have found someone who proposed. So, as a married woman, I’ll be free to do it and know I am not committing any sin.

A Performing Arts, Industrial and Labour Relations’ graduate from the Olabisi Onabanjo University, Ago-Iwoye, Ogun State, Seyi, born of an Igbo father and Akwa-Ibom mother, started out her career in the Yoruba sector and has since featured in close to twenty films in both Yoruba and English language movies. She recently declared that she is still a virg-in in an interview:

Are you in a relationship?

Yes. I was attracted to him because of the fact that he’s born again, spoils me with gifts and puts my needs before his own.

Sex and money,which is more important to you in a relationship?

I know nothing about sex, I’m a virg-in. Money is more important to me in a relationship.

She emerged Miss Nigeria in 2010 at age 19. In one of her interviews during her reign, she insisted that she is a virg-in.:

You have a boyfriend?

One of the reasons for such is that considering my age, I think I‘m too young for that and also I really don’t need one now. I still have more time to make the right choices. So if she has lost her virgin-ity, you know she lost it after her reign but she hasn’t said she has lost it. Nigerian curvy and sexy presenter had said that she is still a virg-in and that she’s keeping her virgin-ity for her future husband. She said that while answering questions from her fans via Twitter.

Lagos guy caught in the act, peeping a lady taking her shower – What happened next will leave you in a big shock! (See Photo)

If your man does these 5 things, you are being manipulated!