See what Buhari sent to Obasanjo on his birthday 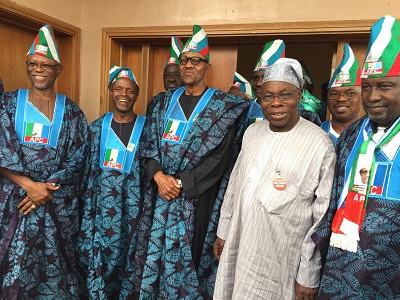 What Buhari sent to Obasanjo- The All Progressives Congress (APC) presidential candidate, Gen. Muhammadu Buhari (retd.), praised Nigeria’s former President, Olusegun Obasanjo. It is evident that Chief Obasanjo will be receiving a lot of congratulatory messages on his 78th birthday which he celebrates today, March 5, 2015. One of them has already come from the former military Head of State. It should be noted that after OBJ had dumped the Peoples Democratic Party (PDP), it was on numerous occasions alleged that he endorsed the APC candidate.

Although seems that directly, it was not the case, but Obasanjo has been referring to Buhari as a man capable of ruling the country.

Speaking recently in Abeokuta, Ogun State, the ex President Obasanjo was said to have predicted that Buhari would win March 28 elections.Today General Buhari has something to say about the renowned politician. According to GMB, Obasanjo is a corageous patriot who is not afraid of telling the truth.

He made this known in a statement issued specially for the occasion, P.M. News reports.

Buhari also characterized Obasanjo as a nationalist whose commitment to democracy and good governance are worthy of praise.

Although the birthday man is often described as a controversial politician, his patriotism is truly remarkable, Buhari added.

The APC candidate insisted that Nigeria’s former leader is always there for his country, to jolt the conscience of leaders to listen to those they govern.

Moreover GMB commended Chief Obasanjo over his spectacular broadminded approach and passion with which he served the country.

Interestingly, the birthday man prepared for the big day in quite an unusual manner. March 4 he played football with some of his colleagues. Obasanjo was wearing a T-shirt with number 78 on the back, his age.