READ Gen. Buhari’s only surviving sister interview – What she said about Buhari will leave you in a big shock! 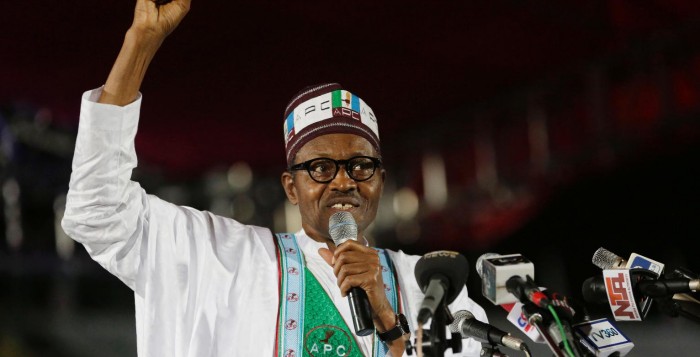 Buhari’s only surviving sister interview – Hajia Rekiya Adamu is the only surviving sister of President-elect General Muhammadu Buhari out of 24 family members. In an interview with Vanguard on Friday, April 3, 2015, Hajia Adamu, popularly known as Amadodo in Daura, General Buhari’s country home in Katsina State spoke of the president-elect’s childhood, his upbringing and relationship with community members.

In an interview with Vanguard on Friday, April 3, 2015, Hajia Adamu, popularly known as Amadodo in Daura, General Buhari’s country home in Katsina State spoke of the president-elect’s childhood, his upbringing and relationship with community members.

Read excepts from the interview:

Hajia, now that your only blood brother has emerged as Nigeria’s President-elect, what do you have to say about his upbringing?

Buhari, since he was a boy has always been a calm person. He doesn’t talk so much and he avoids trouble with others. He is very caring, he is very close to his relations, he is such a person that doesn’t like to break family ties. He tries as much as he can to link up with others anywhere. He lived with me before when he was schooling in Katsina. I was married then and every one was amazed by his conduct because no one ever reported him to me. He is intelligent and I remember during his childhood he was outstanding. He has no enemy. Even now, go around Daura town, he has no enemy. His attitude has endeared him to all.

How close is he to the family, having been such a public figure?

I’m his only elder sister, he always visits me. Even during tight schedule especially during election campaign, he always found time to see me. I mean he would sneak in to see everybody. Anything that I or any distant relation needs, he never hesitates to provide. He tries his best to make the family happy.

Among his siblings, how do they see him?

We were 24 in the family, all others have died remaining Buhari and me. They used to call him Akali during his childhood. That is the name our parents and relatives call him. I cannot recall why they called him that, because I was small then but I know that is the name we called him. We also call him Leko because he was born after twins.

How did your parents regard him?

They held him in high esteem. He returned when he was held in prison when our mother died, they really loved him and showed all of us love and care.

Now that he is the incoming president how do you see his victory?

It’s blessing to Nigeria because he had held that position before, but as a military man. He is honest and trustworthy and these attributes are still his hallmark. We pray God to see him through this national assignment. We call on Nigerians to give him the needed support to enable him transform the country.

19 real struggles of women with big butt which they will never tell you!