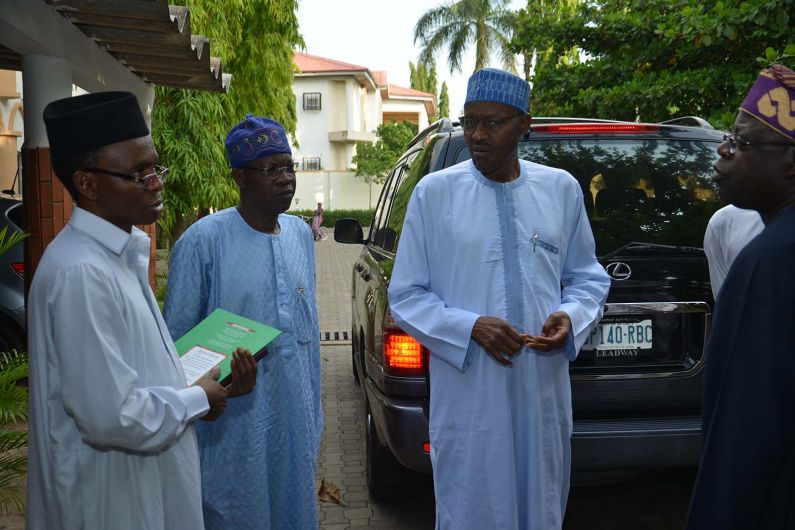 Bola Tinubu blasts Buhari: National Leader of the All Progressives Congress, APC, chief Bola Ahmed Tinubu has surprisingly criticized President Muhammadu Buhari​,​​ ​saying he betrayed the party. This is in the wake of events that led to the emergence of Ex-Kwara State Governor Bukola Saraki as the President of the Eighth Senate and the return of Chief Ike Ekweremadu as the Deputy Senate President for a​ ​third term.

Tinubu, who on Wednesday through the Nation Newspaper​,​ in an article titled “The untold story of PDP’s coup behind Saraki’s Senate Presidency” pointed an accusing finger at President Buhari for displaying neutrality in who emerges as the Senate President without due regard to the fate of the party.

According to Tinubu; “Despite the choice of National Assembly leaders being a mixture of party politics and legislative duty, the aloofness, or the perceived neutrality of the President allowed the ‘fight’ within APC to fester until it went of hand.”

He explained that the invitation of the APC lawmakers to the International Conference Centre, ICC, was said to be at the behest of the President; shockingly, the President did not show up.
“The bewildered 51 APC Senators, who were waiting endlessly for the President in ICC, watched the proceeding of the inaugural session from a nearby TV box.
“Before the 51 APC Senators could race down the five-kilometre stretch from ICC to the Assembly Complex, Saraki had emerged as an unopposed candidate.

“To add insult to injury, President Muhammadu Buhari neither showed up nor sent apology to the stranded Senators at the ICC.
“They were left at the mercy of troops from the Brigade of Guards, who had already been deployed in the centre ahead of the supposed arrival of the President.
“Unfortunately, there was no communication between his office and the 51 APC Senators who heeded his invitation.

“It was around 10.35am, we saw that the inaugural session was already on and Saraki had been elected. If we were to be defeated, it should have been done on the floor.”
In defence ​of President Buhari​,​ a highly-placed source, said: “The President had actually made up his mind to be at the ICC but there were feelers that some associates and strategists prevailed on him not to dabble in the selection of the Assembly leadership because he will portray himself as an inconsistent leader having promised not to interfere in the internal affairs of the Legislature.
“Probably acting a pro-Saraki’s script, these associates/strategists made the President to realise that his last-minute intervention would amount to dancing to the tune of one man: Asiwaju Bola Tinubu.

“Even if President Buhari is not interested in a second term, he owes the APC a duty to keep the party intact.”

Tinubu therefore stressed that the coup in the National Assembly by PDP was a litmus test for Buhari’s leadership prowess.
“The President may need to assert himself by playing a fatherly role to reunite his political platform that is in tatters.

“When some leaders met with the President after the coup in the Senate, he was said to ‘be hollow’ without a solution to the crisis at hand. The time to act is now,” he emphasized.
The APC National leader berated Buhari for the refusal of the APC leadership to address the important index of power-sharing formula deprived its National Assembly members of the much-needed unity.

“If there had been an acceptable formula in place, the situation may not degenerate to this extent. What Saraki did was to be tactical in conceding the Deputy Senate President to the Southeast which is almost relegated to the background by the Buhari administration.”
“Unless an urgent reconciliation is put in place, the anti-party activities which led to Saraki’s Senate Presidency might cause a prolong crisis in the party. And with plans by the APC leadership to enforce discipline, some leaders might call it quit with the party,” Tinubu added.

10 shocking customs you should know before traveling – You need to see this!

Just imagine how this woman dressed to a party; revealing all – This is so nasty!