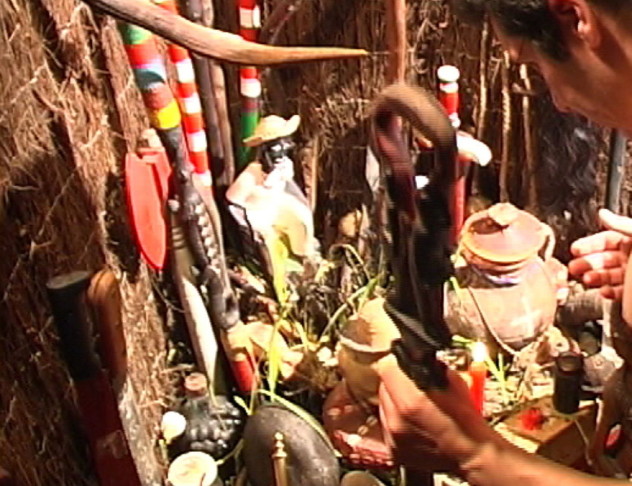 Cults and religions of the underworld – Gang initiations and rituals often mimic religious rites, and some say that gang activity fills a spiritual void in the lives of many of society’s marginalized.

Some criminals adopt alternative religious beliefs to justify their activities and provide a sense of solace.

The cult of Santa Muerte, or Holy Death, can be traced to Mictlantecuhtli, Aztec lord of the underworld, and Christian personifications of death. In her modern incarnation, she appears as a skeletal figure in a wedding dress, carrying a scythe, and often adorned with fabulous jewelry and ornaments. Some claim that they can remember household shrines to the goddess over half a century ago, but her cult began to truly grow in the 1990s following the waning influence of the liberation theology of left-wing activist priests. Following the increasing conservatism of the mainstream Catholic church, many of the poor began to turn to Santa Muerte as a transgressive alternative faith.

She is said to be a protector of both criminals and the marginalized in society: the poor, prostitutes, and drug addicts. She has many names, including the Skinny Lady, the Bony Lady, the White Girl, the White Sister, the Pretty Girl, the Powerful Lady, and the Godmother. She is paid homage to with gifts of tequila and water in exchange for boons and protection. She is described as a “bad bitch,” a doting grandmother figure, and a representation of the holy power of death.

Santa Muerte is a popular focus of worship in Mexico’s prison culture, where she is believed to protect against nosy wardens and the aggression of other inmates. Her cult has also infiltrated many of Mexico’s cartels. She has an appeal to the criminal world because while holy death eventually comes for us all, she does so without judgment.

As she is an unrecognized saint, devotees can ask things of her they would not dare ask of an official Catholic saint figure. The majority of the 5–10 million Santa Muerte devotees in Mexico and the United States still consider themselves Catholics. The official stance of the Church is that since Christ is said to have defeated Death, the worship of Santa Muerte is tantamount to the worship of Christ’s enemy, Satan. Some priests even blame her for a boom in demon possession cases, which have allegedly left Mexico’s officially sanctioned exorcists horribly overworked.