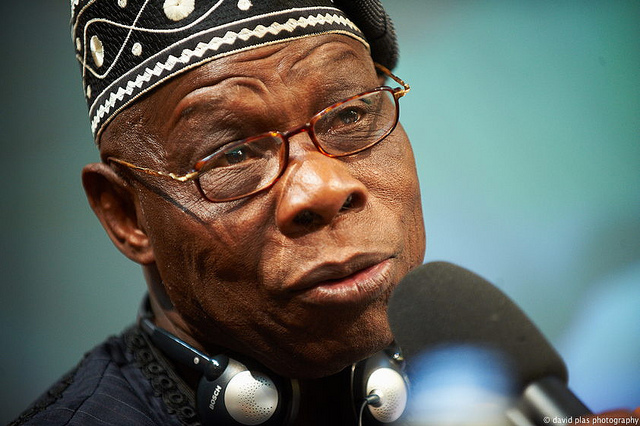 Obasanjo, a former army general, who publicly ripped his party membership card, is said to be planning a return to the PDP through the back door as his relationship with the Nigerian president has refused to improve.

Pointblanknews.com gathered that the president rejected every attempt by the Ogun state-born politician to get close to him (Buhari), shortly after he won the March 28 presidential election.

Obasanjo, who had publicly stated his preference for Buhari ahead of former president, Goodluck Jonathan, had reportedly made the first move to get cozy, with the establishment of a think tank to study critical areas of the economy and make recommendations to guide Buhari.

The committee, established under the Centre for Human Security, an offshoot of Obasanjo’s presidential library, studied five key areas – education, power, the economy, security and infrastructure.

Reports confirmed that Obasanjo did not only present the report to Buhari, he also positioned and presented Stephen Orosanye to the president as a possible candidate for the post of the secretary to the federation which the Nigerian leader may not have favoured.

Garba Shehu, Buhari’s chief spokesperson, had told reporters that the vice chairman of the committee and former minister of finance, Dr Kalu Idika Kalu, presented volumes of the report to Buhari in Abuja, but it was unclear if the president is looking towards that direction.

And since it was gathered that Obasanjo’s ultimate goal was to be in the good books of Buhari and evade any form of scrutiny from his administration which seems not to be forthcoming, the Owu high chief may be seeking a return to the party which brought him into prominence.

Pointblanknews.com further hinted that Obasanjo’s current move is to block any attempt to make immediate past president, Goodluck Jonathan the BoT chairman of the party.

A PDP source reportedly revealed that Obasanjo has already begun moves to return to the party after setting up meetings with PDP governors in the South- South and South- East, but it seems that a handful of them are not buying the idea, due to Obasanjo’s inglorious past and how he subjected Jonathan and the party to public ridicule.

Former Akwa Ibom state governor, Senator Godswill Akpabio, is also reportedly being used by Obasanjo to convince others and is being groomed for a vice presidential spot in 2019 with a Northerner, preferably embattled former governor of Jigawa state, Sule Lamido.

Lamido, is being tried for an allegation N10 billion fraud which also involved his two sons.