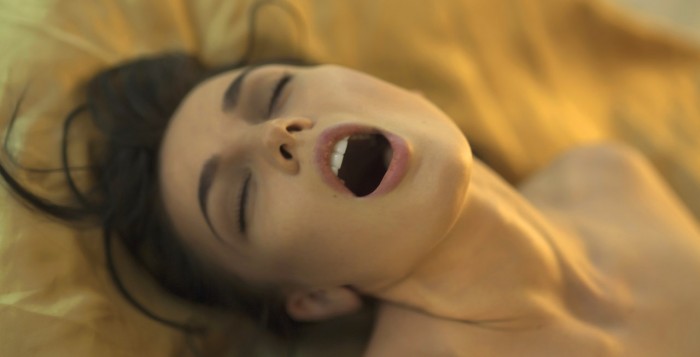 We are afraid to talk about it and when it is shown, it is from the male gaze in media such as pornographic films, which in general are made by men for men. These films, unless you truly understand their production and falsity, give people the wrong idea of what it really is to see a woman in a state of pleasure.”

Crow used to do burlesque and knew some of the women through that; others just thought it sounded cool. She likes to post on Craigslist because as she says, “I find that people who respond to those ads are, for lack of a better word, regular people.”

The subjects were between their 20s and 40s, and are from all different backgrounds — social workers, actresses, cooks, dance teachers, biologists, and more. It’s a great cross-section of women.

“It was funny; I thought my remote was going to work, but of course, equipment likes to not work when you need it to. So, I ended up having to be on a chair above them looking through the lens.”

Making sure that her subjects were comfortable was one of her main concerns.

“They would be nice and covered, because one of the main things is that I’m always trying to make people feel safe, reminding people, ‘This is about you,’ and, ‘You’re in control. Anytime you don’t feel safe, just let me know and you can stop.'” Crow told Refinery29.

The images have an old fashioned quality to them as they are in the form of Tin types. “I shot the images digitally, then created my own negatives and spent a lot of time perfecting the art of creating tin types,” she said.

The end result is stunning, and what Crow learned from doing this series is extraordinary.

“This project not only helped me, but helped other people, gain some ability to really let go and enjoy themselves. Anything you do is fine — there’s no wrong way to enjoy yourself and no right way to look while doing it.”

1. Photographer and artist herself goes first…

Lauren Crow was her own first subject, saying, “When recruiting people for projects it’s helpful to have a visual aid.”

13 Nigerian celebrities and their parents (With Pictures)