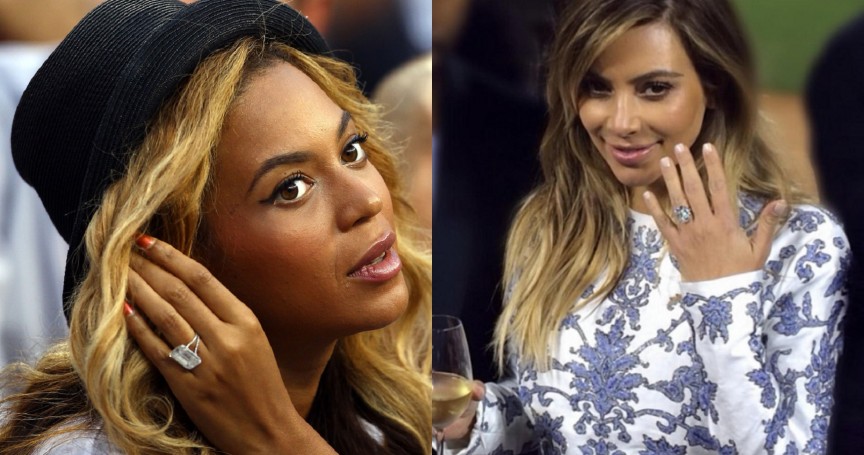 Most expensive celebrity wedding rings – They say one out of two marriages end in divorce now. It was also once said that your engagement ring should be worth two months salary. But, if they came up with that two months salary thing back when marriages worked, shouldn’t that get an overhaul, too?

In other words, if half the world’s marriages are now ending in divorce compared to 50 years ago, shouldn’t men also be investing less in a ring?

Think about it: marriage might last, invest two months. Marriage might not last? A month’s salary seems more fitting. The fine print is, that is not the case. Though marriage may slowly expose itself as the financial sham and life ruiner it is, it still wants all your attention and money. Nowhere is this demonstrated more than when it comes to celebrity engagement rings. It’s not even like they are buying the ring they think will be most beautiful and represent their love. Nope. Celebrities just want to buy a ring that is BIGGER than the other celeb’s ring. “Oh, so-and-so got a one million dollar engagement ring? Well here honey, make sure you tweet about how this one cost two.”

Like with most things in Hollywood, it is a contest, ultimately paying for bragging rights. The funniest part is, most of these marriages end up failing, and the ring ends up being another quarter million lost and gone forever (which tends to mean little to people as rich as this). Here are 10 of the most expensive and extravagant celebrity wedding rings, because love should cost lots of money AND your soul.

The funny part here is, it almost seems like a Victoria Secret angel would be the person most likely to get the engagement ring worth THE MOST, but here she is at the bottom of the list. Why? Because even though $150,000.00 is a great deal to most of us, it is mere chump change when compared to other rings you will see as this list goes on.

We have to give Seal some credit, though, he did alright for himself. Perhaps if that ring had been worth a bit more, she might still be around. Just saying.

Any man who would be willing to marry a woman who’s last name is “Witherspoon” has to be brave. It seems this Legally Blonde actress was given this ring by Jim Toth, with it coming in at a hefty $250,000.00 – a quarter of a million strong, just for her ring finger. Not too shabby.

Although there are rampant rumors things are not working out between these two, they are hanging on for dear life and anyone looking in would have no idea.

The 5 female ministers in Buhari’s Government (With Pictures)

List of agencies and parastatals under Amaechi, as a minister of transport