Olajumoke’s mum with mother-in-law – Mrs Ramota Kamorudeen, a vegetable seller at Obada market in Iree, Boripe Local Government Area of Osun State, is the mother of Olajumoke Orisagunna, the bread seller in Lagos who recently shot to fame courtesy of ace singer and photographer, T. Y. Bello. In this interview with Saturday Tribune’s OLUWOLE IGE, Mrs Kamorudeen bares her mind on her daughter’s sudden transformation. 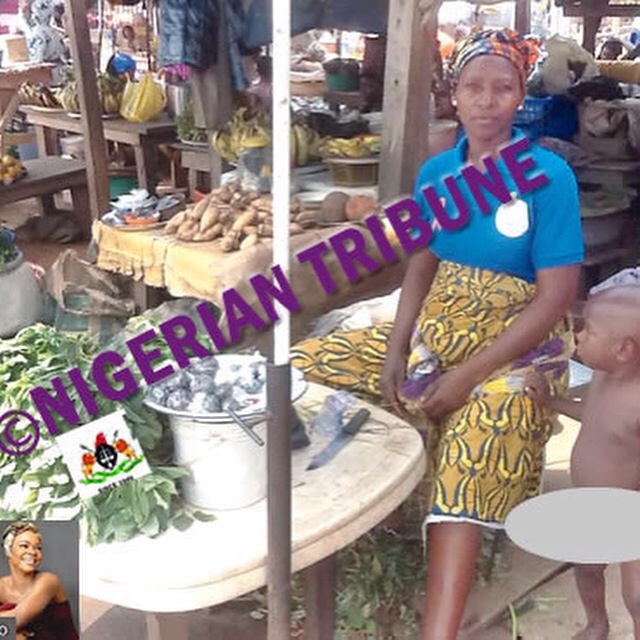 How did you receive the news of your daughter becoming a celebrity overnight?

I was very happy when I heard. It is a thing of joy that my daughter has become an important person in life.

Was there previously a sign or prophecy that Olajumoke would be great in life?

There was no sign and we did not receive any prophecy from a pastor or alfa that she would become famous in the future. What I have always known, however, is that only God has the power to change a person’s status from nothing to something.
I beseeched God to open the door of opportunities for her, let her make it and let anything she laid her hands on in Lagos turn to gold. I prayed God to make her meet somebody who would help her. Those were my prayers and I thank God that He has answered them. 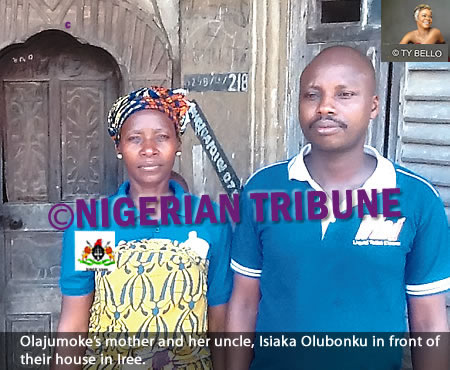 How would you describe Olajumoke?

She is a lovely child, well-behaved and easygoing. She does not do anything that can bring problem to her or others.

Why did her education stop at the primary school level?

After she left primary school, she told me that she wanted to learn hairdressing, so, we took her to a shop here in Iree where she started to learn the occupation. That was the reason she did not go beyond primary school. After she completed her apprenticeship a few years ago, we organised a graduation ceremony for her.

Now that Olajumoke’s status has changed, what is your advice for her?

I know that God does things His own way but my advice for her is to allow God to lead her in everything she does and listen to the instructions of people who have helped her to become what she is today. My prayer is that as God started something great in her life, He would continue to help her so that she would rise and become successful. 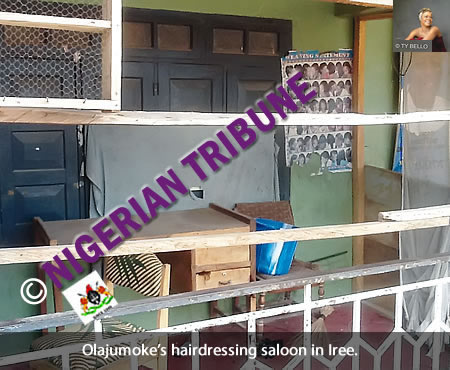 Has she called you since her life changed?

Yes, she has called me several times. She even called me the day the good thing happened and explained everything to me. She told me about how she was discovered by the lady called T. Y. Bello. I was so excited. I danced vigorously to appreciate God for ‘remembering’ my daughter. She has not come back to Iree since that remarkable thing happened to her but we have been communicating on the telephone. We speak on the phone at least six times a day.

How do you see your daughter’s sudden fame?

God has done something so wonderful in my life that I cannot express how joyous I am. My daughter has made me proud. God has set her feet on the path of greatness.

What is your plan now? Do you intend to go and meet your daughter in Lagos?

I want her to settle down first. I will go and meet her in Lagos later. She told me that they would soon travel.

What about her husband, Sunday Orisagunna?

Her husband has gone to meet her since the time she was discovered by T. Y. Bello. One of Jumoke’s children is with her and the other one is here in Iree. 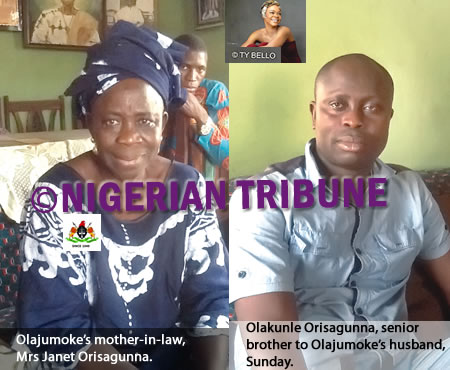 How did you receive the news of Olajumoke’s fortune with her pictures in newspapers and on social media?

She is my son’s wife but I treat her as my own daughter. I felt very happy when I heard the good news.

Since your son, Sunday, married Olajumoke, how would you describe her attitude?

She has always exhibited a good character. My son met and impregnated her when she was learning hairdressing. My son had phoned me from Lagos and said that if I heard that he impregnated a girl, it was true and he was ready to marry her. In the evening of that day, somebody brought Jumoke and mentioned Sunday as the one who put her in the family way. I said there was no problem and asked her to come and stay with me. Some weeks later, she brought her luggage and began living with me here. I soon went to meet her parents and told them that we had accepted her as our wife and daughter. Since she gave birth, I have been taking care of her. Sometime last year, she told me that she was going to Lagos to work and I gave her my blessing. She dropped her firstborn for her mother but when the child was sick, my in-law brought her to me, saying that she said he wanted to see her father (Sunday), who was then in Osogbo, where he was learning to make aluminium doors and windows. Sunday came to Iree for the weekend and we took the child to the hospital and thereafter, she was okay. But when Jumoke heard that her child was sick, she said she wanted to come and take her to Lagos and I said there was no need for that. Not quite long afterwards, she came to Iree and started staying here.

However, in January, this year, she told me that she was going back to Lagos and I asked about her decision to return to Lagos. This time, she took her two children to Lagos but I was not comfortable with it and I gave her husband money to go and bring back the first child so that she could continue her education in Iree. I didn’t want anything to disrupt her education because it might be difficult to find a school for her in Lagos. She later brought the child back to Iree. About a week after, she went back to Lagos and the next thing we heard in the news is that she has become a model. We did not really take the news seriously at first. Her husband called and told me that he wanted to travel to Lagos because some people took the picture of Jumoke and they were looking for her and eventually found her at the bakery where she usually bought bread in large quantities. He said they asked him to come to Lagos over the matter. I gave him the transport fare and he left for Lagos. When he got to Lagos, Sunday called me and said that it was good news and we were all happy.

What is your advice for Olajumoke now?

This is a thing of joy for me and Jumoke’s parents. For us in the Orisagunna family, we see it as a big success. Jumoke and her husband, my son, should continue to pray and thank God and realise that it is God who has brought them this far in life.