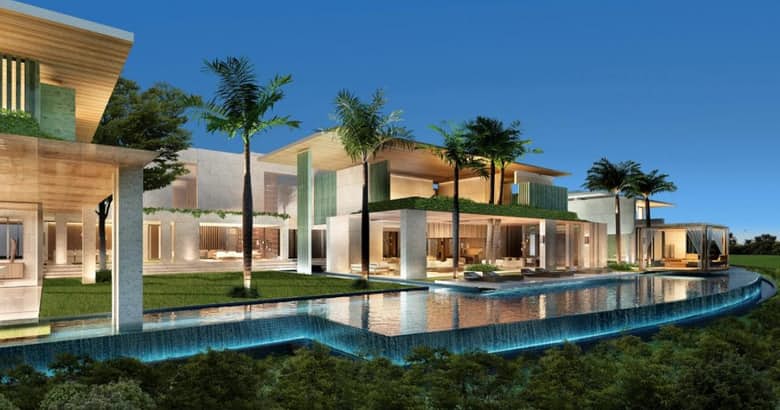 Most expensive and extravagant villas in Dubai – Human beings are like virtually every other species on Earth, in that they require three basic things in order to survive: air, water and food; but unlike many other species, we also require clothing and shelter in order to keep ourselves warm and to remove ourselves from the dangers of the outdoors.

The first main form of shelter we became accustomed to came thousands of years ago when our ancestors lived inside of caves to get away from the elements and possible predators, and as time passed, so did our capacity to learn things, which is how we managed to create man-made shelters out of sticks, leaves and animal skin. Eventually, we learned to make shelters which were much larger and required the use of different and more durable materials, which is when shelters began to be known as houses.

Now in 2016, houses come in all shapes and sizes, from a trailer-home, all the way up to a castle or mansion. It should come as no surprise that individuals who possess a lot of wealth often times own very large and expensive properties and homes; and depending on the place, there are entire communities that are made up of solely luxurious living spaces, and the city of Dubai in the United Arab Emirates is one of these places. Dubai is home to an incredible amount of high-end real-estates known as villas, and these massive properties are surrounded by some of the most breathtaking scenery in the entire world, which is why these villas are some of the most expensive houses around. Here is a list of the 15 most expensive villas in Dubai.

There are numerous artificial/man made land masses in the world, and they are made for primarily two reasons: to expand a country’s military presence, or to provide a country with more luxurious resorts and housing. In the case of the United Arab Emirates, they constructed the Palm Jumeirah archipelago for housing, and this landmass which is an extension of Dubai’s shoreline, is home to many expensive villas. The Frond C, Palm Jumeirah Villa is one of these villas, and it covers roughly 13,000-square-feet of land which possesses six different bedrooms, as well as separate entrances that keep the property’s employees from getting in the way of the owners. This villa comes with its own pool, and it not only provides a great view of Dubai’s skyline, but it also gives its owners a near perfect line of sight with the Persian Gulf. At the fifteenth spot on this list, this may be the cheapest of the expensive villas, but it will still cost someone over 12.2 million dollars to own.

Prev post1 of 14Next
Use your ← → (arrow) keys to browse
Tags: countdowndubaientertainmentfeaturedMansionsphotosPlaces
Share12Tweet8Pin3SendShare