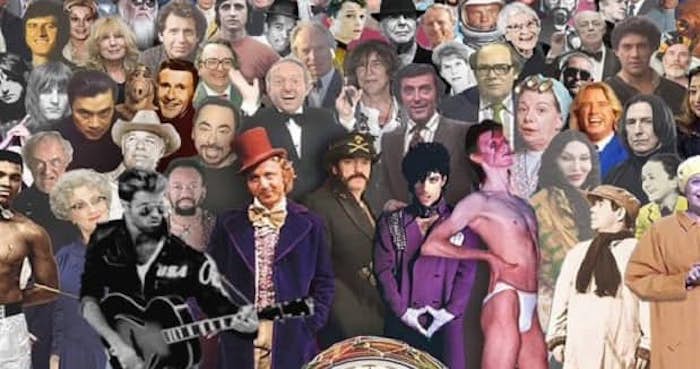 Celebrity deaths in 2016: 2016 was a gut-wrenching year in a lot of ways. From the terror attacks to the police shootings to Brexit to the Trump presidency, the majority of us are very happy to leave it all behind. In between, we lost a lot of beloved celebrities from our pop culture landscape as well, from David Bowie to Alan Rickman to Harper Lee to Prince to Muhammad Ali. This was followed by Christina Grimmie, Gene Wilder, Leonard Cohen, Fidel Castro and Carrie Fisher, to name but a few.

Indeed, it was impossible to list all of them here. Was it a coincidence that Carrie Fisher’s mother, Debbie Reynolds, perished a day later than her daughter? Like us, you may have finally googled “why did so many celebrities die in 2016”? Is something strange happening? Is this just completely random? Are all of these celebrity deaths simply a reflection of our own immortality? In the words of Bowie himself, “The truth is, of course, that there is no journey. We are arriving and departing all at the same time.”

13. We Are Getting Older, We Are Obsessed With Our Own Immortality

Similar to the “circle of life” theory is the fact that all of us are simply getting older. This means a lot of things. First of all, as we get older, we become much more interested in, and also know a lot more people than we once did. Everyone in Hollywood is getting older, too. When these people pass away, we feel our own immortality much more acutely, an idea suggested by The Guardian. It has also been suggested that if you are one of those people who post on social media about a celebrity’s death, you really are speaking to your own ideas about your finite time on earth. Either way, perhaps all of the celebrity deaths in 2016 are just a symptom of our age.