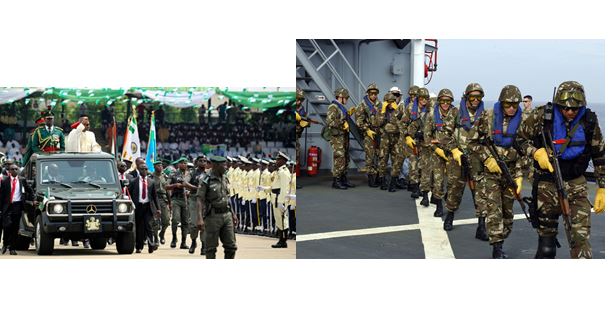 Countries with the most powerful Military in Africa: A majority of Africa’s most powerful militaries ranked by the latest report by Global Fire Power (GFP) are from the northern part of the continent indicating increased spending in the region after the Arab Spring of 2011. The report shows that six out of the top 12 countries on the continent surveyed are from North Africa. Egypt and Algeria maintained their position at the top the chart of 30 African countries included in the index

Egypt also ranked 12th out of 126 countries in the world.

Others north African countries in the top 10 most powerful militaries in the continent included Morocco, Libya, Sudan and Tunisia.

While there is still not enough information about the military strength of all African countries, the opens of most African government in terms of their military spending has improved over the years, according to Stockholm International Peace Research Institute (SIPRI).

GFP considered more than 50 factors in determining each nation’s power index score. The smaller the value of the index the more powerful a country’s military is, with 0.0000 being the perfect score.

“The factors are set within our algorithm which attempts to provide a fair canvas that allows smaller, yet technologically-advanced powers to compete with larger, lesser-developed ones,” GFP said.

“In the end, we hope it represents an unbiased ranking and realistic outlook on the conventional military firepower and strength of a given country for a given year.”

Here are the 10 biggest, baddest, most powerful militaries in Africa in 2016: