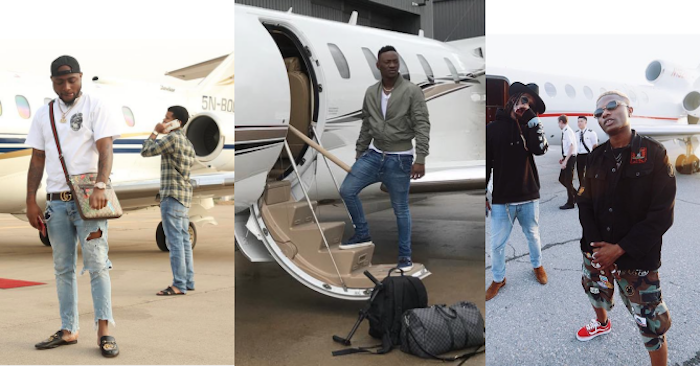 Celebs living a fake life: Dammy Krane’s arrest in Miami for an alleged credit card theft and fraud has raised a question on the seemingly rich lifestyle displayed by Nigerian celebrities on their social media accounts. An American private jet service company, TapJets have reportedly set to pursue the course of justice for Dammy Krane’s crime of booking a jet using a stolen credit card. Nigerians are more curious than ever on the assumed wealthy lifestyle of Nigerian celebrities especially the singers who boast of crazy account balances, expensive diamond crusted jewelries, wads of thousand of dollar bills on the bed/bag, and of course, a private jet selfie to complement their story of success.

Here is a list of singers who have shared photos of their private jet lifestyle to evoke feelings of want in their fans. And who knows, maybe they aren’t as financially buoyant as they make their fans think.

Remember Sinzu? remember in the year 2013, he was arrested for a credit card scam, which was filmed by a CCTV in Atlanta. Remember Oge Okoye (The dog drama)? Remember Special ED (Davido’s hype man, who was arrested for fraud in 2011 and then there is Godwon, who burgled into another person’s apartment and stole valuable goods? This is just to name a few.

The singer is of course first on the list. His alleged booking of a private jet with stolen credit card started the whole controversy.

Dbanj loves to show off his affluence on the Instagram and that is known by everyone especially his fans. Couple of times, he has been dragged to the media about owing, some months back it was said that he was owing a landlord of one of his rented property in Lagos. Also, rumour has it that the house he poses with as his, in the USA, really isn’t his but his friend’s