Check out how Floyd Mayweather Jr spends his millions – His cars, his insane wristwatch collection, private jets, mansions & many more (With Pics) 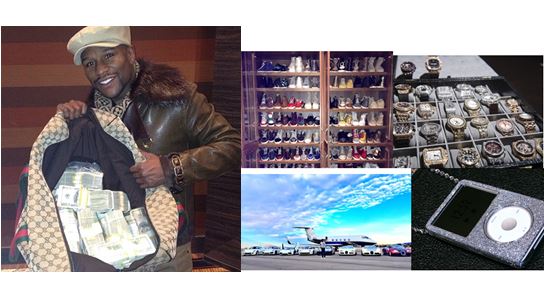 Floyd Mayweather aka “pretty boy”  is one of the biggest pay-per-view attractions of all time and one of a very elite group of athletes to see their career earnings nose above the $1bn mark. A shrewd businessman and the greatest boxer of his generation — if not all time — Mayweather has been listed as the highest paid athlete in the world four times by the American business magazine Forbes. Mayweather is so rich that he even changed his boxing identity to reflect his staggering wealth. TheInfoNG reveals how the renowned boxer spends his millions. Brace yourself for this

Fashion is only fashion as long as celebrities are wearing… The Gulfstream G550 is a business jet aircraft produced by General Dynamics’ Gulfstream Aerospace unit in Savannah, Georgia and Floyd has had his custom made to have all the trappings of luxury.

It features custom made seats, on board minibar and flat screen TV’s.

Floyd also recently bought a second private jet, because owning one private jet these days is just not enough.

This custom built 12 seater plane has gold lining throughout, gold sinks and gold cup holders as well as a fully stocked kitchen.

Both planes combined come in at a staggering $74 Million Dollars.