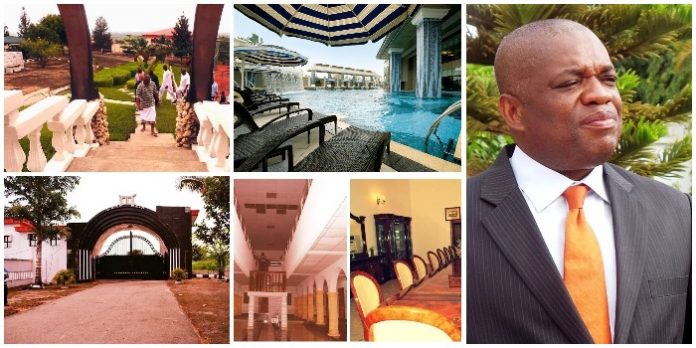 Uzor Kalu’s mansion: Have you ever wondered how rich is Orji Uzor Kalu, the chairman of some well-known Nigerian companies and former governor of Abia State? The answer is: he is so rich that he could afford an enormous mansion consisting of 400 rooms! Read about Orji Uzor Kalu house in Igbere and see the breathtaking photos.

This man has a lot of experience in business and politics. Born on April 21st, 1960, Orji Kalu grew in Abia State, Nigeria, and later proceeded to become a governor of this state. He served as Abia State governor for eight years – from 1999 to 2007. Before he was elected to this position, he used to be a chairman of Borno Water Board and a head of Cooperative and Commerce Bank limited.

He was also a part of People’s Democratic Party (in 2007, he tried to run for President from this party). Orji Uzor Kalu used to be a chairman of PPA Board of Trustees, but he resigned. Apart from that, he also presided as a head of Daily Sun and New Telegraph, the Nigerian newspapers. So, his working experience includes being a successful businessman and a head of some huge corporations.