#BBNaija: See how viewers voted for their favourite housemates this week 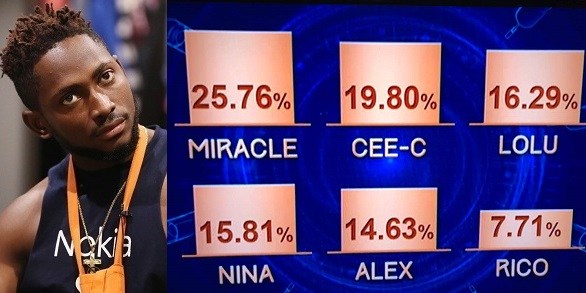 In light of this, here’s the statistics of how viewers voted for their favourite housemates this past week. As it has been in consequent weeks, Miracle takes the lead in votes with a percentage of 25.76 while surprisingly, Cee-C followed with 19.80%. Lolu came in third with 16.29% and Nina next to him with 15.81. if it were two housemates leaving the house this night, Alex woulda been one of them as she was second to the last with 14.63% of votes which leaves evicted housemate, Rico Swavey with the least vote percentage, 7.71.

With 8 housemates left in the Big Brother House and just two weeks more into the game that has been on for 69 days, the pressure is certainly on as everyone anticipates who will emerge as the winner of the game.

Viewers definitely have a lot of voting to do in the next 14 days if they want their favourite housemate to emerge as the winner of this year’s edition of the show. Our arms are folded and fingers are crossed for the next few days of the show… Who will win the Big Brother Naija: Double Wahala show?

#BBNaija: “Miracle is my best friend, nothing will happen with us after the house” – Nina