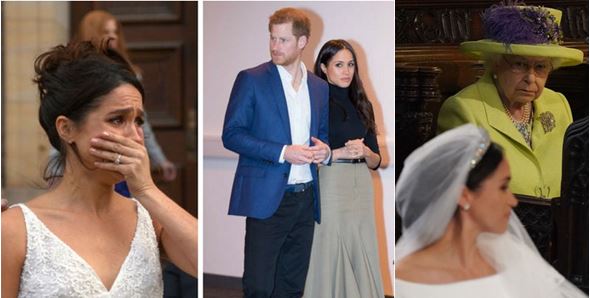 And while everything looks and seems like a fairytale, all might not be that way behind closed doors. After all, Meghan Markle has gotten plenty of scrutiny by the British media. For some reason that many are still trying to figure out, a lot of critics simply don’t like her because she’s American, she’s biracial and she’s a divorcee. But Prince Harry has managed to look past all that and love her for exactly who she is.

With that being said though, we’ve got 10 reasons why fans are already worried about Meghan Markle’s future. Being a prince’s fiancée is one thing, but being a member of the British royal family is another thing altogether.

10 Her Acceptance Into The Royal Family Has Been Rocky First and foremost, Meghan Markle isn’t like the rest of the British royal family. She’s an outsider. While there’s no doubt that Kate Middleton was a commoner too, her situation was a little different. She pursued Prince William for ten long years. She’s British. And what’s more, her family is pretty wealthy. Kate and William knew each other in school for several long years before getting together.

In some ways, Meghan Markle is just like Princess Diana. She’s already proven that she’s a force to be reckoned with, simply because she insists on doing things her way. Just like Diana, she omitted a certain controversial word in her vows to Prince Harry on their wedding day. And for a lot of royal critics, it came across as a huge shock.

According to People Magazine, “Diana was the first to break royal precedent when she didn’t promise to ‘obey’ Prince Charles at their 1981 wedding. A long line of royal brides before her included the phrase in their wedding vows, as prescribed in the Anglican Book of Common Prayer dating from 1662. But Diana, choosing to follow the ritual of the Church of England, instead promised only to ‘love him, comfort him, honor and keep him, in sickness and in health.’”

9 She Already Broke Tradition At The Reception

As many royal fans have already noticed, royal women are expected to be seen, and not heard. Okay, that might not be totally true, but there’s a reason why a lot of things Kate Middleton says in public are usually scripted.

But with Meghan Markle, she doesn’t need a script. She already broke royal tradition by giving a speech at her own wedding. Clearly, Meghan likes to be both in control and the driver’s seat. But at the same time, this might be a problem down the road. Meghan Markle won’t be able to change or break every royal rule by herself. Eventually, she’ll have to learn how to adapt to the way things are done in Buckingham Palace, whether she likes it or not. And for someone who is so opinionated as Meghan, it might be a struggle. After all, she’s used to doing things her way, when she wants and how she wants it.

According to Brainy Quotes, Meghan once said, “With fame comes opportunity, but in my opinion, it also includes responsibility – to advocate and share, to focus less on glass slippers and more on pushing through glass ceilings and, if I’m lucky enough, then to inspire.”