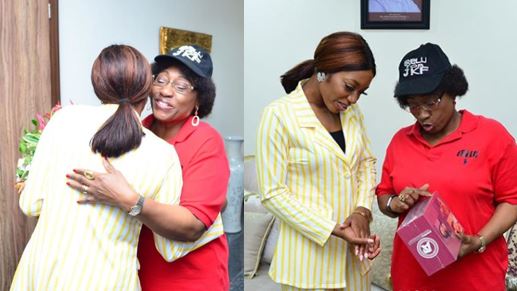 Khafi who has been on media tour ever since she left the house visited the first lady at her office in the Government House, Ado Ekiti. The reality star who could not hide her excitement noted that she was happy to meet the first lady as she regarded as a Friend, Sister and a Mother, she also reveal via the post that they chatted about her plans for Ekiti State and Nigeria as a whole.

Khafi also added that it was an honor meeting the great woman as she hopes to do more great things with her in the nearest future.

She uploaded photos of her meeting with the first lady on her Instagram page with the caption:

#HomecomingChronicles continued! Meeting the First Lady of Ekiti State was incredible. It felt like I was meeting a mother, a sister and a friend all at once. We shared our stories, chatted about my plans in Nigeria and for Ekiti State and it was so wonderful to know she is a supporter of women, is in my corner and ready to lend her support in whatever way she can. Thank you so much your excellency Mrs @bisiafayemi. It was an honour to meet you and I look forward to doing more with you in the future. Thank you to Hon @muyiwa.olumilua for making this possible. #acupofkhafi #EkitiForKhafi #firstlady #womensupportingwomen
Suit from @pierce_clothing 😍
Photo by @olusegun_ajibola ‘I never liked my female body, I have always wanted a p*nis’ – Popular transgender reveals