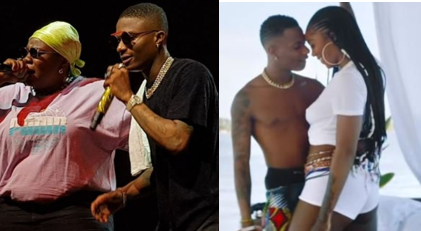 Nigerian Singer Tiwa Savage and a twitter user, Ayo Smallz  did each other dirty on Twitter over ladies and their place in a relationship. It all started when Tiwa made a tweet, responding to the red flag trend that lingered for the whole of yesterday on Twitter She wrote; “Ladies, should we let them know sometimes that we gat options?”

And the Twitter user who seems not to find it interesting  decided to indulge in a banter with the singer.

In reaction to her tweet, he  wrote; “Imagine leaving playboy for a fvckboy haha.”

READ ALSO: Mercy twerks for Ike on stage at her Homecoming party in Owerri (Video)

Tiwa in a response to show she was ready to go all the way with the guy in the battle of words,wrote; “Imagine leaving a real queen for a slay queen.”

And the user who also didn’t want to back-down responded to that. He wrote; “Imagine leaving TJ for Wizzy… na we we dey run.”

Tiwa Savage used to be the main woman on Wizkid’s radar (Aside from his 3 baby mamas); however, Wizkid has had to reshuffle his cabinets and become more of a free man and have more friends both male and female.

This has not sat well with Tiwa Savage, who feels she should be No. 1 woman and treated like a “queen”. One of the new friends Wizkid has been fond of is Teni. Taking a cue from her last tweet, Tiwa Savage seems a bit jealous Teni gets all of Wizkid’s attention these days.

BBNaija: Cindy admits she lied, tenders public apology to vendors who called her out (Video)