If you are having a bad day, watch this KO and praise God (Video)

A graphic video of the moment Alistair Overeem’s upper lip split in half after being knocked out by Jairzhino Rozenstruik on Saturday at the UFC event in Washington, DC.

Sportsbible reports that Alistair Overeem controversially had victory snatched away from him late on against Jairzinho Rozenstruik after sustaining a horrific cut to his lip.

The 39-year-old MMA star was on route to securing a decision victory on Saturday at the UFC event in Washington, DC.

But Rozenstruik, 31, fought back in the fifth and final round and unloaded two devastating punches on ‘Demolition Man’ with four seconds left in the fight.

‘Bigi Boy’ nailed Overeem with a shot to the left of the face before hitting him with a powerful right, which caused his top lip to split.

And Overeem went crashing down to the mat and landed against the cage wall after taking the brutal shot.

Referee Dan Miragliotta immediately leapt into action and called off the fight. 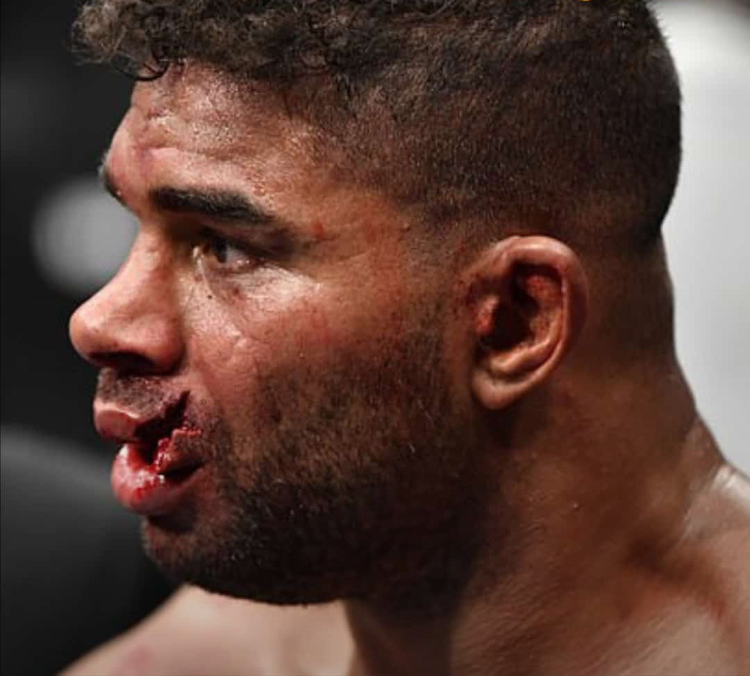 Overeem has since taken to Twitter to confirm that he has had his injury “stitched up.”

He tweeted: “Getting stitched up. Lip not to sexy at the moment.. a little bit a fast stoppage if u ask me – but hope u guys enjoyed the fight.”

The clash has been met with widespread backlash from fans, despite Overeem suffering his horrific cut.

Overeem leapt to his feet after being downed and Miragliotta never waved off the fight or called for an official halt.

The referee also allowed time on the clock to keep ticking down even before Overeem climbed back to his feet, with the victory snatched away from him with four seconds left in the round.

“Except Alistair got up right away and the ref stops the fight when Overeem isn’t being attacked and round was up in 4 seconds,” Twitter user Narinder wrote.

While another fan posted: “Bit odd. Overeem was straight up. But the fact the other guy didn’t follow in with ground and pound as they usually do tells me he knew it was done.”

And user @Lewislfc745 added: “Why did the ref stop the fight!? Overeem got up straight away.”

Fans have been stunned by the extent of the injury, with one person posting on Twitter: “I’ve been watching UFC for 15 years and never seen someone punch the lip off an opponent.”