Tiwa Savage has shared a photo of herself chilling with American rapper, DaBaby during at the UMG Grammy showcase in the America.

The Universal Music Group Grammy showcase went down on Friday night and a lot of celebrities around the world were present at the showcase. Tiwa Savage was present there as well and she linked up with several American celebrities. Tiwa shared the same stage with Billie Eilish, DaBaby and other A-list singers and after her incredible performance, she linked up with the Grammy-nominated rapper backstage and shared the iconic moment on the gram.

See the picture below: 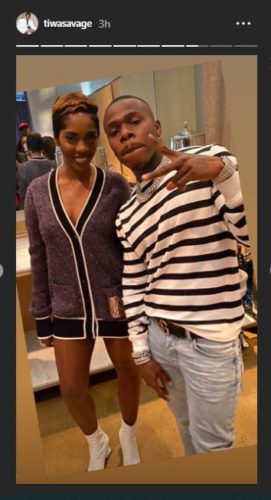