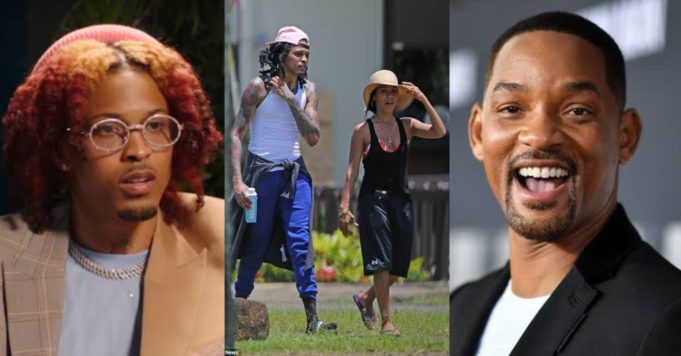 Singer, August Alsina in a recent statement has disclosed that he had a four-year love affair with Jada Smith and that her husband, Will Smith approved of it.

Alsina made this known in a new interview with Angela Yee. During the interview, Angela brought up old rumors of August having a relationship with Jada.

The two had been photographed together and August mentioned Jada in his 2019 song “Nunya (Remix)” as many people took the music video as August confirming he was with Jada.

According to him: “People can have whatever ideas that they like, but what I’m not OK with is my character being in question. When certain things are questionable that I know is not me, or that I know that, what I haven’t done — contrary to what some people may believe — I’m not a troublemaker.

I don’t like drama. Drama actually makes me nauseous. I also don’t think that it’s ever important for people to know what I do, who I sleep with, who I date, right? But, in this instance, it’s very different, ’cause as I said there is so many people that are side-eyeing me, looking at me questionable about it.

It’s because people don’t necessarily know the truth, but I never have done anything wrong. I actually sat down with Will and had a conversation.

Due to the transformation from their marriage to a life partnership that they spoken on several times, and not involving romanticism, he gave me his blessing.

I totally gave myself to that relationship four years of my life. I truly and really, really deeply loved, and have a ton of love for her. I devoted myself to it, I gave my full self to it.

So much so to the point that I can die right now and be OK with knowing that I truly gave myself to somebody. I really loved the person that I experienced that [with] and know what [that feels] like — if some people never get that in this lifetime.

Because I love these people. I really, genuinely do. I have never been in love in that kind of a way. So much so that being intertwined in that way — walking away from it butchered me.

I’m shakin’ right now because it almost killed me. Not almost. It. Broke. Me. Down.”

This past Saturday I had the chance to sit with the wonderful @angelayee and discuss everything… the album, the doc, life, love, hardship… everything! The conversation is up on my youtube now. Link below – #stateofEMERGEncy #TheProduct3 – https://t.co/1ZK658to8u pic.twitter.com/Mkx27OuKSw