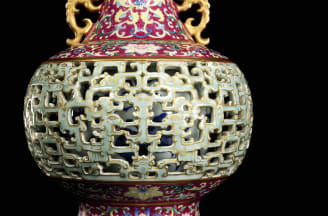 A rare 18th-century Chinese vase which was once sold at auction for a mere $56 is now currently going for about $9million after it was discovered in an elderly woman’s house which is said to be filled with pets.

Johan Bosch van Rosenthal, an  Amsterdam-based art consultant was the one who found the Chinese art piece.

The vase possesses a blue-and-white floral design and is visible through the object’s lattice-like body and was made specifically for the Qianlong Emperor, who ruled China for more than 60 years.

The vase is described by the auction house, Sotheby’s as a “lost masterpiece.”  It was revealed that the rare 18th-century artifact spent the last 50 years in a remote house in central Europe surrounded by the owner’s pet cats and dogs. 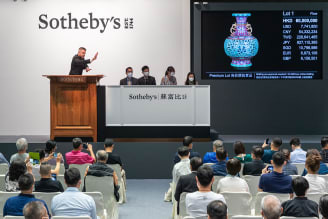 Also described by Sotheby’s as a “technical tour-de-force,” the pear-shaped vase is an example of a style of porcelain known as “yangcai,” or “foreign colors,” that saw artisans incorporating Western-style coloration and enamels into their craft.

“It is a miracle that this extraordinarily fragile vase survived half a century in a home surrounded by countless pets,” said the chairman of Sotheby’s Asia, Nicolas Chow, in a press statement.

The vase which is “double-walled” is just one of a handful of similar designs and was created by imperial kiln supervisor Tang Ying in the years 1742 and 1743.

Van Rosenthal, who discovered the item, recalls uncovering the dust-covered object after being invited by an old woman in her 80s to assess her collection.

“We reached a room with a number of Chinese works of art inherited many years ago,” he said.

“Her four cats walked around freely among these. She pointed out a … partly gilded Chinese vase on a cupboard — a cherished object which she knew to be something special and valuable.”

After it’s discovery, the vase was inspected by Sotheby’s experts who matched it to an item in the Chinese imperial household’s archives.

Previously kept in the Palace of Heavenly Purity, part of Beijing’s Forbidden City, the item was once praised by the emperor for its design.

My achievements came through assistance from strangers –…