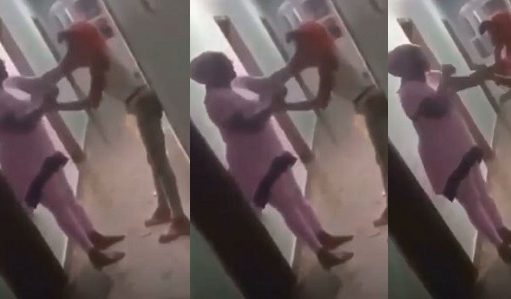 There was mild drama as Nigerian mother disgraces her daughter in the hotel premises where she caught having an illicit affair.

Inside a hotel premises in an unknown location in the country , the mother was captured in a video that’s begun serving rounds online, disgracing her daughter after catching her with a man in the hotel.

As can be seen in the video, the quite enraged mother who is heard speaking in Yoruba, drags her daughter out of the hotel premises while hitting her intermittently.

‘I have the right to kill you’, Man says after…

Other people are seen watching the whole situation and not necessarily trying to dissolve it.

Dorathy Bachor celebrates Nigeria’s independence in style, pens down words of praises for the country