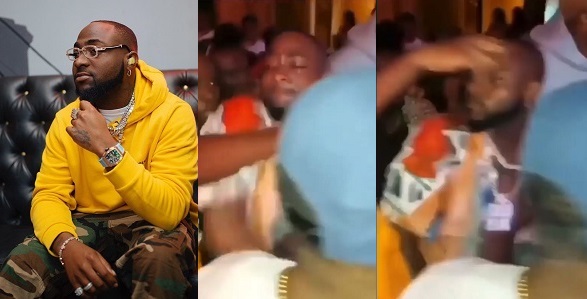 Nigerian celebrity singer, Davido has been in the news again as he embarrassed a fan in ghana simply because the fan wanted a selfie with him.

Since the arrival of he and his 30BG gang in Ghana, the music executive has found himself being trailed by over controversial occurrences.

The singer has now been spotted in a viral video ‘slapping’ a fan — as the singer was walking down with fans who gathered after he turned up at a club, he’s seen slapping off the hand of a fan behind him who tried to take a selfie with him with his hands on his shoulder.

Watch the moment below;

Davido and his crew were allegedly denied entry into a popular club in Ghana, Bloombar. In the video spotted online, Davido was seen visibly angry and shouting at the top of his voice and he could be heard threatening to buy the entire club.

Thursday is Thursday! – Runtown says as he plans to go on with his #EndSARS protest after Naira Marley cancelled