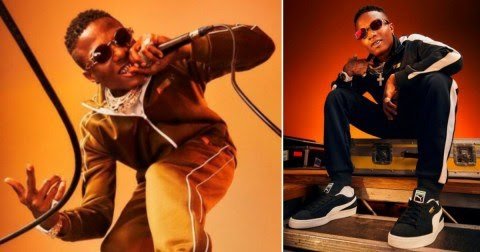 Nigerian music star, Wizkid took to his Twitter handle on Wednesday to share a short video clip in the caption of which he announced he had been recruited by Puma to launch its Suede classic FW20.

The development comes as part of his recent ambassadorial deal with the German multinational corporation, which designs and manufactures both athletic and casual footwear, apparel, and other accessories.

While announcing its partnership with the 30-year-old music star, Puma had said: “We’re thrilled to have Wizkid as the face of the new Puma x JD Suede campaign.

“A truly innovative and exciting artist in the music scene, Wizkid embodies the passion and hustle we look for in someone to represent Puma and we look forward to working with him for the AW20 season.”

The Puma Suede was first released in 1968 and has been a popular style for the brand ever since.

Speaking of the collaboration, Wizkid had said: “Honoured to be the new face of the brand. It’s an honour to be the face of the new JD x Puma Suede Classics campaign.

“Puma is a brand I’ve loved and respected growing up, and so the decision to become an ambassador felt completely natural.

“The Puma Suede is a classic shoe that can be worn by anyone at any age and I think my fans will really connect with that.”