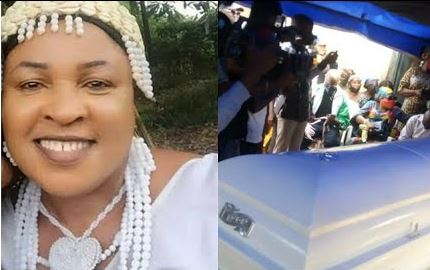 Nollywood veteran actress Mrs. Folake Aremu, popularly known as Orisabunmi, has been laid to rest in her hometown Olla in Kwara State, on Monday, January 18.

The fiery screen goddess who rode into prominence in the 80’s playing Orisabunmi in a TV series Arelu reportedly died at her Ibadan, Oyo State residence on January 5. Her death came as a shock to fans, colleagues, and well-wishers but not long after that, two of her siblings died in less than 72hrs after her demise

Orisabunmi’s nephew finally reveal cause of death of Orisabunmi, Her brother and sister which all happened within 72 hrs.

Despite the Covid-19 regulations, quite a lot of people attended her burial, this is to tell us how popular she is in her career. It’s a pity we have to lose her now. She was born 1960 and her acting prowess was prominent in 1980s. She has been finally laid to rest and a video surfaced online on how she was been buried by her family.