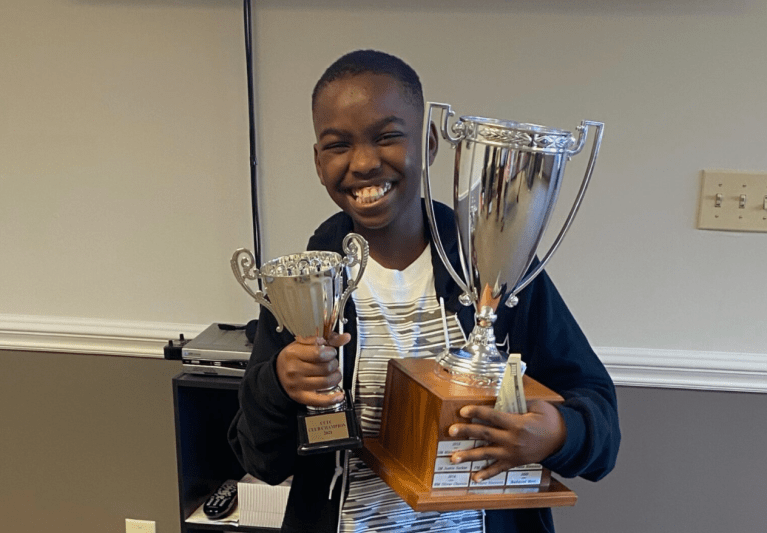 A 10-year-old Nigerian refugee has become the National Chess in the United States of America.

The little intelligent boy is identified as Tani Adewumi and this has really gone on to prove why Nigerians are one of the brilliant people in the world.

Per what we gathered, the little boy fled with his family from Nigeria to the US during the Boko Haram crisis.

He first came into the limelight in 2019 after winning the 2019 New York Chess Championship and during that period, he was in a homeless center on religious asylum.

Earlier in the year, it was announced earlier that he was set to compete in the Chess Club of Fairfield County (CCFC) and it was during this competition that he has won the national title.

His success was made known in a recent social media post on Twitter by Nicholas Kristof who is a columnist for New York Times.

“Remember Tani Adewumi, the Nigerian refugee kid I wrote about 2 years ago who won the NY State chess championship while in a homeless shelter? Now well housed (thanks to you readers!), he just won a championship and is officially a National Chess Master as a 10-yr-old 5th grader!” 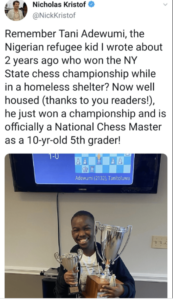 ‘Show Me A 43-Year-Old Who Looks Younger Than Me’ – Actress, Mercy Aigbe Brags In Latest Post