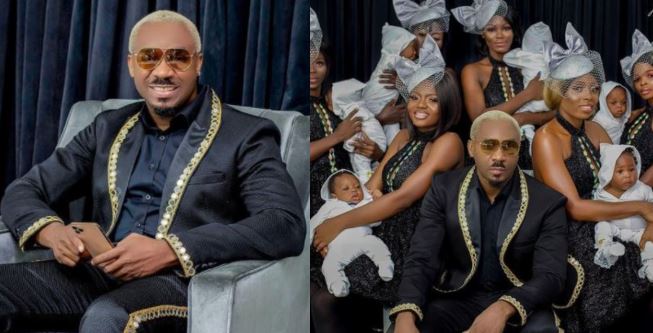 Popular Social Media Personality, Pretty Mike has stirred reactions on social media again as he stormed the wedding of Toyin Lawani today in company of 6 different women carrying babies. Pretty Mike is a socialite and he does a lot of weird things. He likes being the cynosure of all eyes in any event he attends and just like he always did, he attracted people’ s attention at the wedding party of Toyin Lawani yesterday.

The Socialite has a history of doing weird things at big events. He once attended the wedding party of Actor Williams Uchemba in company of 6 heavily pregnant women wearing matching outfits in 2020. He always causes controversy on social media by pulling weird stunts in public events. He was once arrested in 2017 after he stormed an event with some girls that he chained with a dog leash. He literally brought two young girls in a dog leash to a public event in 2017.

His actions attracted lots of criticisms which made the Lagos State Government to order of his arrest. He was arrested and made to sign an undertaking that he would never engage in any form of dehumanization again. He explained that he just wanted to get people’ s attention before he passes his message about Women’ s liberty across. He claimed that women are strategically put on leash in our society.