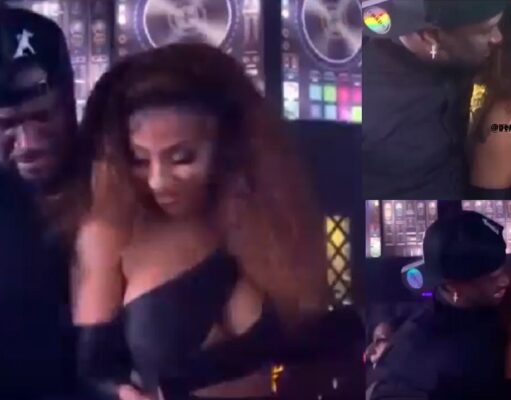 A video of ex- BBNaija  housemate and the reality show winner, Mercy Eke and Peter Okoye in a club has sparked outrage  on social media, with some criticizing the singer for disrespecting his wife, Lola.

Mercy and Peter were seen dancing together at a club in a video circulating online, and they appeared to be enjoying each other’s company.

The two were smitten with each other, and Peter muttered something in Mercy’s ear that made her bite her lower lip.

BBNaija Mercy Eke reveals dating Ike is one of her regrets…

Read; “N100k is nothing compared to a dinner date with me” – Mercy Eke

The video has since sparked outrage on social media as netizens called him out for dancing intimately with a woman that is not his wife in public. According to fans, Peter’s action is unbecoming of a married man.

cres_luv wrote, “What’s wrong with ladies saying”so they can’t dance again” if it’s ur husband that a lady is rocking like this, would u be comfortable with it?? Except u are capable of doing such,then it’s wrong.And as a married man, it’s not ideal to be dancing with a single lady in such manner.”

officialstunner1 wrote, “To me it’s disrespectful, if it’s the wife dancing with a man like that , this igbo man no go take am at all”

cheeyoma wrote, “It’s irresponsible for God’s sakes. He’s a married man and should act like it”