Former Senator Ben Murray Bruce took to his official Facebook account to share a picture of himself and Genevieve but the fans could not stop gushing over her ageless look.

Reacting to the photo, many hailed the actress for her look while some other were torn between believing it was a recent photo of assuming it is a throwback. See some reactions below; 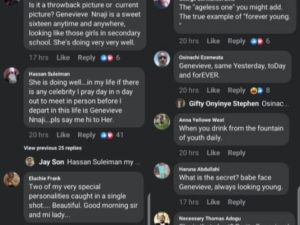 Genevieve Nnaji started her career at the age of 8 in a television soap opera, Ripples and has kept viewers glued to her movies with her phenomenal acting over the years.