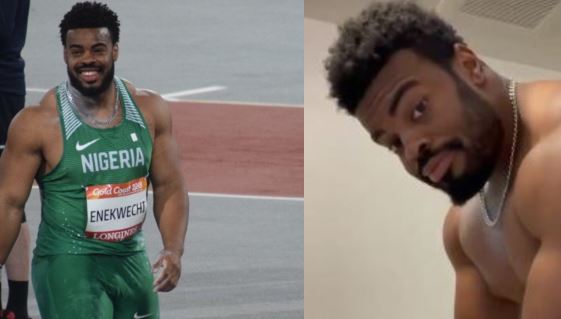 Team Nigeria’s Chukwuebuka Enekwechi has shared a video of himself washing his “only” jersey ahead of the shot put final at the ongoing Tokyo Olympics.

Earlier on Tuesday, the 28-year-old Nigerian-American had secured one of the non-automatic qualifying spots for the final after clinching the fourth position in group B.

He ranked seventh on the overall qualification log after hitting the mark of 21.16 meters.

”Nigeria has happened to my family”- Lady mourns…

Upon qualifying for the final, which is billed to hold on August 5, the African champion uploaded the short video of himself washing his jersey in a sink under running tap water.

The now-viral clip, which was uploaded on his Instagram page on Tuesday evening, was followed with the caption: “When you qualify for Olympic Finals, but you have only one jersey.”

BBNaija 2021: Liquorose Reveals Her Biggest Regret In The House