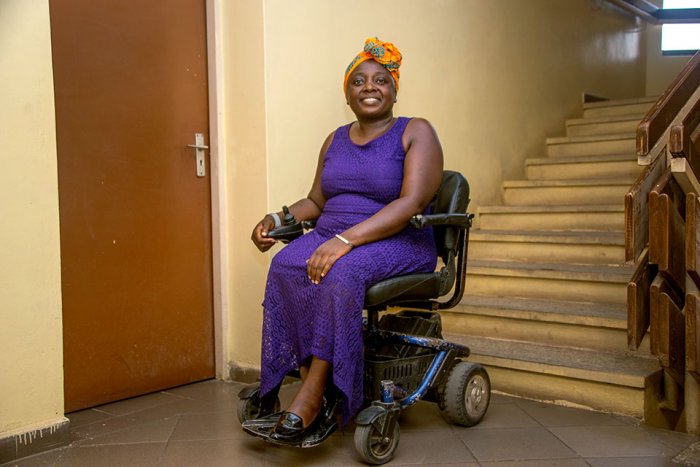 The status of women still has a way to go in Nigeria, with women still getting the short end of the stick.  Although there are women who are making a difference and challenging gender stereotypes by becoming involved in professions previously dominated only by men, the International Parliamentary Union reports that women make up no more than 6% of Nigeria’s parliament.

According to the National Bureau of Statistics, between 2010 and 2015 only 38% of federal employees in Nigeria were women. However, women are just as likely, as men, to access an EasyBet Casino and enjoy a fun, easy and rewarding experience.

It should also be noted that that the maternal mortality rate in Nigeria is the highest of any other country in the world.

Notwithstanding this, we are seeing change taking place. Below we take a look at 5 exceptional women. Each one is making a real difference and challenging the status quo in Nigeria.

Lous Auta is the first disabled legislative candidate in Nigeria.   Having contracted polio as a very young child, it left her permanently in a wheelchair.   However, this has not prevented Auta from pushing through all the obstacles she has come up against as a woman in Nigeria and one with a disability.

Cedar Seed Foundation is a nonprofit organization founded by Auta to advocate for the rights of individuals with disabilities in Nigeria.  In 2017, at the World Economic Forum (WEF), Auta was named as Young Global Leader.

In 2019 Auta made another giant step and decided to run for a seat in Nigeria’s lower legislative house. She was the first person actively living as a disabled person to do this.  She spoke at the UN in 2019 saying “I am an advocate of inclusive legislation.  I am glad that the Persons with Disabilities Bill has been recently signed, which means we will have better access to infrastructure, health care, and transportation. If I win the elections, I will sponsor bills that provide an enabling environment for persons with disabilities, especially in the area of education.  I will also ensure there is a 10% reserved quota in every organization for graduates with a disability”.

is the first African, and the first woman to be appointed as the director general of the World Trade Organization (WTO, a truly historical event. This took place in February of this year, 2021 and she actually took office on March 1st.

After her confirmation as the head of WTO she made the following statement “Today WTO Members are making history.  For the first time in the 73 years of GATT ad WTO you are selecting a woman and an African as Director-General. This groundbreaking and positive. I am grateful for the trust you have in me, not just a woman and an African, but also in my knowledge, experience, and as some of you have said, possessing the courage and passion to work with you to undertake the wide- ranging reforms the WTO needs to reposition itself for the future.”

Okonjo-Iweala has given women representation on perhaps one of the biggest and most powerful platforms in the world.  Prior to this she served twice as minister of finance in Nigeria’s parliament, and for 20 years worked at the World Bank. She was also on the board of Gavi – the Vaccine Alliance.

Aguebor is a vehicle mechanic and Nigeria’s first!   Automobiles have dominated her life, with a career spanning 32 years.  Aguebor managed her own garage, Sandex Car Car Garage, for 22 years and she is certainly challenging the status quo – that only Nigerian men know how to repair cars.

In 2020 she was interviewed by CNN and she said “Becoming the first lady mechanic in Nigeria is not a bed of roses – men have been doing this for generations.  The men thought I was crazy at first. I had to work five times harder than the men to prove myself”.

Taking it a step further, Aguebor initiated the Lady Mechanic Initiative to teach women at risk how to repair cars, acquire skills to develop financial independence.  To date, more than 1000 at-risk women in five Nigerian states have benefited from Aguebor’s training.

Adenike Oyetunde is a force to be reckoned with.  She has a whole assortment of titles. She has recently become the disability advocate and Senior Special Assistant to the state governor of Lagos dealing with Persons Living with Disabilities.  She is also a lawyer, an author, a social media influencer, a well-known media personality and also a life coach.

At the age of 20 she lost her right leg to bone cancer which completely changed her life.  However, she decided that she was going to push through those obstacles in Nigeria that would prevent her from living the life she wanted.    She completed a law degree and developed a successful career in radio.  Oyetunde also created the Amputee United Initiative which advocates on behalf of persons with disabilities.

She is very active in a voluntary capacity at the Irede Foundation, a non-profit group that works with children who have undergone amputations and provides them with the prosthetic limbs they need.

In a conversation with PUNCH in 2017 she said “I am trying to teach people like myself, amputees, to love themselves because society does not accept them even though it is not their fault.”

Oyetunde’s work has shone a light on the huge challenges faced by people with disabilities and with her new appointment as Special Assistant to the Lagos state governor on Persons Living with Disabilities we will surely hear more.

Karayat Sanni became the first Nigerian woman to become a fighter pilot in 2019 at the tender age of 22 years.   The first female fighter pilot that the Nigerian Air Force has had in its 55- year history.  She went through the standard combat training at the (NDA) Nigerian Defence Academy and was the first woman to do so and was “winged for a fixed wing fighter aircraft.”

Sanni was also named “overall best pilot” at the NAF 401 Flying Training School in the US, in 2017 where she undertook training. Sanni is certainly challenging the status quo.

“What is the problem with me?” – Lady laments after finding out that her crush is a taxi driver