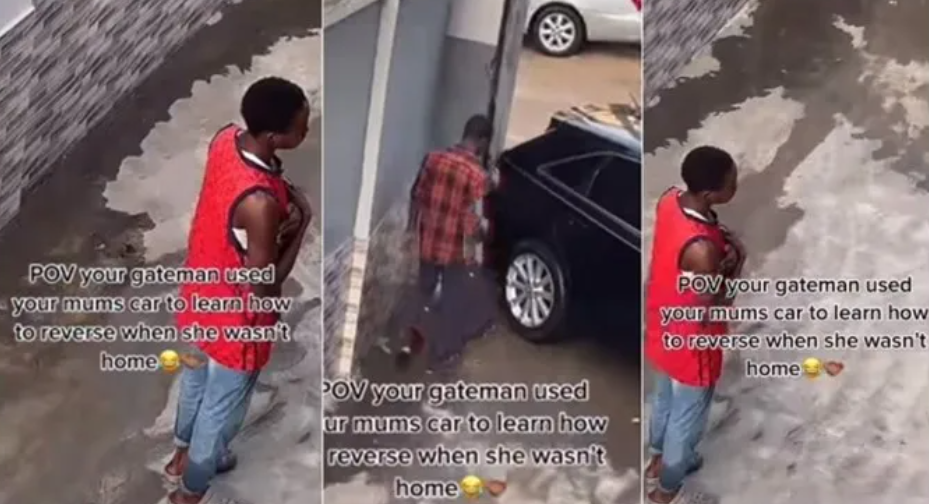 A security guard got himself into trouble after attempting to practice driving in his employer’s car.

While learning how to drive out of the compound in reverse, he dented his madam’s SUV.

The gateman reportedly waited for his madam to leave and took advantage of the opportunity to test drive the whip, which ended in disaster. He hit the back bumper on the gate, almost knocking it off.

In a video recorded by the woman’s child and posted online, someone could be seen inspecting the damage done to the vehicle.

Meanwhile, the gateman stood frozen at a distance and watched in silence as someone believed to be a member of the family assessed the level of damage.

He folded his arms across his chest because he realised the grave error he made by driving the car.

”POV: Your gateman used your mum’s car to learn how to reverse when she wasn’t home”, the caption read.

In reaction, social media users opined that he would either lose his job or his boss would deny him his salary.

clear_stretch_; He don loose his job and he will pay for damages with all his past month’s salary.

big_ray001; This feeling ni**a is traumatized

fashion_magicblog; When you drop key with them story must enter

fashion_magicblog; If you want to learn how to combine outfit follow us for fashion inspiration