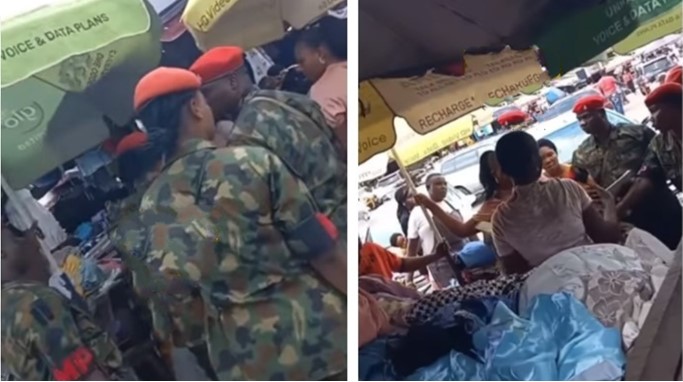 In Edo state, some soldiers allegedly stormed a thrift market to seize military outfits that were being sold to locals.

They reportedly decided to pay a visit after learning that army uniforms were on display at a well-known “bend down” market in the state.

Instablog9ja shared a video of soldiers questioning vendors who they believed were selling the goods they were looking for.

I didn’t attend any primary or secondary school, my…

Video: Passengers enroute Edo state from Abuja flown back as…

Reacting, glowbyvanilla_ wrote; They should pay if they like the camo abeg

hiebywhumey; Abeg make una channel this energy on something else

chiefndozi; Lmaooo instead of them to go to Sambisa

iamdeora_; Make them shaa pay them oo..coz they bought their bells with money

otoide_a; Did they pay? Otherwise it’s theft… and I see guns… what’s that called?

“I stayed when he had nothing” – Lady shares transformation clip of her, boyfriend in a car