“Suleman is an oil and gas businessman not pastor; she aborted thrice for him” — Halima Abubakar’s friend claims (Video) 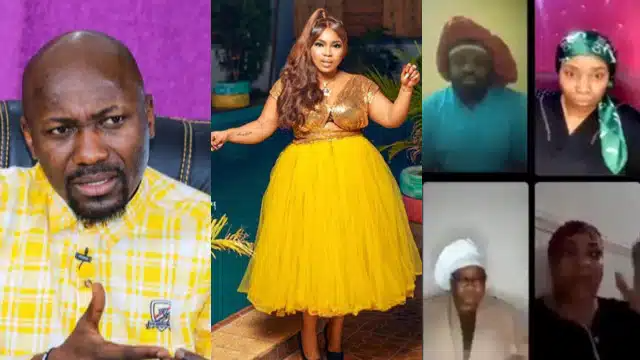 Amid the N1 billion cease and desist lawsuit filed against embattled Nollywood actress Halima Abubakar, her friend joins in to back up her claims against Apostle Suleman.

Apostle Suleman, through his lawyer, threatened the ailing actress with public defamation and gave her a three-day ultimatum.

In a recent development, Halima Abubakar invited a friend to a live Instagram session with Princess, a popular comedienne.

A friend of Halima Abubakar revealed that she knew the actress with ‘Johnson,’ whom they mistook for an oil and gas businessman based on how he introduced himself but never mentioned himself as a pastor.

She pressed on to say that she was aware of the three times Halima aborted for Apostle Suleman and when she began to bleed.

Stressing on how hurtful Suleman’s denial is, Halima Abubakar’s friend stated that she was responsible for looking out for the actress in public whenever she had blood stains.

Apostle Johnson Sulieman & scandal seems to be identical twins.
I know the sexcapades of most top GOs even the ones that has happened when I go to ministers conferences,How they book rooms for their "daughters in the Lord" opposite or adjacent their own room in the hotel pic.twitter.com/azwI5a4BtR

“As long as he gives me money, I don’t care if he’s old” -13-year-old actress, Mercy Kenneth says (video)