Exposed: Diezani – The pretty face in an ugly oily business.. 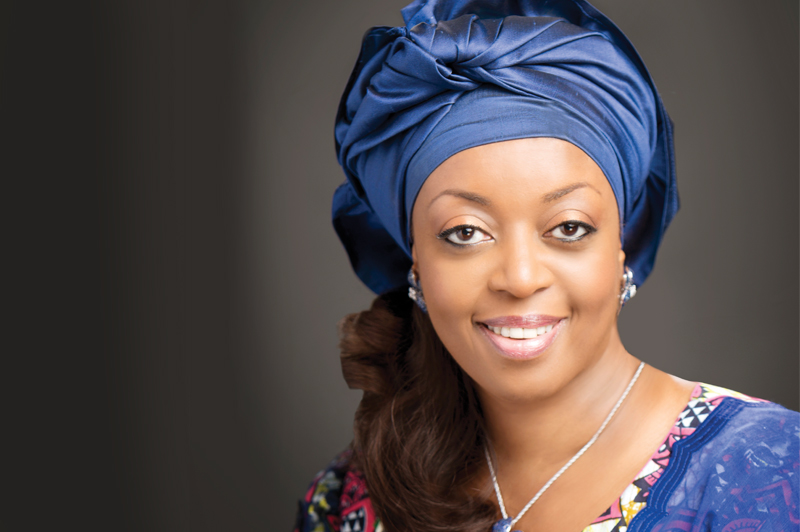 Share
Minister of Petroleum Resources and current President of the Organisation of Petroleum Exporting Countries (OPEC) Mrs. Diezani Alison-Madueke’s name will be featuring prominently in public discussions in the days ahead. Having presided over the nation’s economic engine for a stretch of five years, the various publics, local and international, may find it hard to resist the temptation to ex-ray her controversy-dogged tenure. Born December 6, 1960, the pretty holder of Bachelor’s Degree in Architecture (Howard University, USA) and Master’s in Business Administration, MBA (Cambridge University, UK) is not new to the petrol-dollar spinning industry. She had worked briefly in the United States before returning to Nigeria to join the Shell Petroleum Development Corporation. She rose to become the first female Executive Director, Nigeria, in 2006. Her sojourn in the public sector started a year after when she was appointed Minister of Transport in 2007. She was moved to the Ministry of Mines and Steele Development in 2008. She mounted the saddle as Petroleum Minister in 2010, again, as the first female to preside over that ministry in the country’s oily history.

In the five-year tenure as petroleum minister…

she tried her hands on a number of policy initiatives that she thought could improve the industry and participants as well. According to her, most of these initiatives were meant to “revolutionalise” the industry through reforms with expected far-reaching implications. The Petroleum Industry Bill, in which she is believed to have a great deal of input, is unfortunately still gathering dust in the chambers of the federal legislature. Incidentally, many are made to believe that the PIB, if passed, would have been the talisman for a turnaround of the oil and gas sector.

In a recent media engagement, the minister had rued what she might have considered the inexplicable delay on the part of federal lawmakers in passing the bill. The envisioned Eldorado, presumably inherent in the PIB, is the transformation of Nigeria’s oil and gas industry in such a way that a greater majority of Nigerians can benefit from the abundance of the resources and the wealth therefrom. For starters, however, Allison-Madueke was able to get President Goodluck Jonathan to sign the Nigerian Content Act in April 2010. The Act, primarily, has placed increased percentage of petroleum industry contracts in the hands of indigenous Nigerian contractors. Apparently, this must have informed the award of contracts in the industry by President Jonathan to some ex-militant groups and individuals. If the Act is anything to go by, the quantum of contracts available to foreign contractors has reduced drastically.

One of the most controversial policies introduced under Alison-Madueke is the government’s plan to remove state subsidies on fuel prices. She has been a strong advocate of subsidy removal, a policy which is being resisted by the mass of the Nigerian people. Her argument is premised on the huge financial burden tossed on the government through subsidy payments. It’s well known, however, that a sizable chunk of such payments were going into a few private pockets. It’s a regime of official sharp practices and under-the-counter dealings. Owing to official collaboration and manipulation, the subsidy regime has benefitted a few wealthy magnates, leaving the people at the receiving end. Industry watchers are of the view that subsidy, the way it is being implemented under Alison-Madueke’s watch, encourages inefficiency, corruption and diversion of resources away from investments in critical infrastructure.

Since her foray into political/public life, Diezani Alison-Madueke has had her fair share of controversies and scandals. In June 2008, she was subjected to a Senate probe after it emerged that as Transport Minister, she had paid N30.9 billion about ($263 million) to contractors, between December 26-31, 2007. However, she has never been officially charged or tried for these allegations and has strongly denied any wrongdoing. Diezani Allison-Madueke was alleged to have spent billions of state dollars inappropriately on private jets in a country where many go to bet hungry.

It was under her watch as Petroleum Resources Minister that the proverbial can of worms was opened by the immediate past Governor of the Central Bank of Nigeria (CBN), Sanusi Lamido, who raised the alarm that $20 billion revenue that ought to come into the federation account was missing. The minister’s response was that the alleged missing oil funds from the accounts of the Nigerian National Petroleum Corporation (NNPC) were connected to the reforms contained in the Petroleum Industry Bill (PIB).

At the height of her reign as Petroleum Minister, she is said to be holding sensitive and strategic official meetings in her house rather than the office. This apparently is aimed at commanding some air of invincibility and untouchability in the administration.

In September 2008, there was an unsuccessful attempt to kidnap Alison-Madueke at her house in Abuja with her son, Chimezie Madueke. In October 2009, the Nigerian Senate indicted the minister and recommended her prosecution for an alleged transfer of N1.2 billion into the private account of a toll company without due process and in breach of concession agreement. However, the allegations have never been taken to law, and the minister maintains her innocence.

In spite of all these allegations, Diezani Alison-Madueke has consistently denied any wrong doing much less admitting to committing any crime. Recently (after the elections), she denied reports that six countries where she allegedly sought asylum turned down her request. She however, vehemently denied the allegation.

Critics have also attributed her latter-day closeness and visits to a former military Head of State, Gen. Abdulsalami Abubakar, to seeking some ‘soft landing’ ahead of her disengagement from the plum job. But she denied it all. While addressing journalists in Abuja on Wednesday, April 22, 2015, the minister retorted: “I have not sought such assistance because I am not aware that I have been indicted of any crime that I will need a soft landing”.

Commenting on the various allegations of financial recklessness and impropriety levelled against her and her office, Alison-Madueke lamented: “Over the last four years, I have been severally and unfortunately accused and labelled in so many malicious and vindictive ways. I have explained these things and pushed back robustly on these accusations and I have even gone to court on many of them. Yet, they keep being regurgitated.”

Alison-Madueke said it was “unfortunate, particularly when we are moving into a transition period and looking forward to an incoming government, which is coming to take over where we have ended. For everything that has a beginning, there is an end and that is not a surprise. What is the surprise is the sort of malevolence bordering on personal malicious libel to my person during this period of time.”

Not one to shy away from a fight, Alison-Madueke did not express any regrets over her actions as Petroleum Resources Minister, stressing: “Quite frankly, I think as unprecedented as it is, it does not please everybody and that cannot be helped. But let us remember the unprecedented reforms that have happened in the oil industry during our time, such as major gas reforms, the Petroleum Industry Bill (PIB), which has been completely revised, reformed and put into the hands of members of the National Assembly where it has languished for two years.”

Concerning the private jet scandal, she responded that “we did all these and we put them in place to reduce corruption, so for me to be tagged with various tags of corruption, $10 million jet purchases, who buys jet for $10 million dollars for goodness sake?”

With regards to her performance as Petroleum Minister, believed she had done the best for Nigeria in this job and that she had attained many firsts in the history of oil and gas, “especially in the reforms that we have done”. “In this period of time, I have stepped on many big toes, particularly the toes of the cabals that were in the industry when we came in,” she said.

As the Jonathan administration gradually winds down, the world will soon get to know how Mrs. Alison-Madueke ran the nation’s oil industry. She may end up getting all the kudos or the knocks.

This beautiful lady has been sacked by president Jonathan (+Photo)