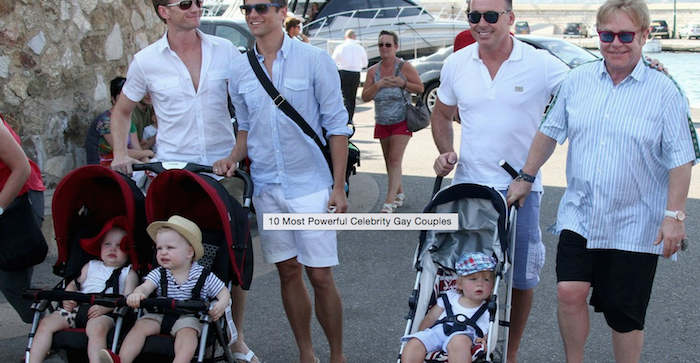 Most powerful gay couples: As more and more celebrities feel comfortable coming out of the closet, people in the the world who are struggling with their sexuality are being inspired to accept themselves and do the same, the progress towards sexual equality has been a long and arduous journey, given that many religious and conservative institutions have dedicated an enormous amount of time and energy to combat the legalisation of gay marriage.

However, with happy, successful gay celebrity couples being open about their own relationships and families, even the prejudiced public minority is beginning to see that a functional, thriving family dynamic is possible among all consenting adult couples – regardless of their sexual preferences.

Hollywood has embraced gay relationships, while the mainstream media points to famous gay couples as icons of progress in the battle for marriage equality. The following are ten of the most famous celebrity gay couples who have helped open up the discussion about gay marriage in a positive way. These celebrities are particularly powerful and relevant due to their work in current movies, social media presence, and work in television.

In December of 2014, Elton John made mainstream headlines after the pop star tied the knot with his longtime partner, David Furnish. They invited the world to celebrate their special day on December 21st – via Instagram, of course.

The couple had been together since 1993, with John proposing to Furnish in 2005. On December 21, 2005, they entered into a civil partnership, and they chose that same date as their wedding day nine years later.

The couple are parents to two children, born in 2010 and 2013 respectively from the same surrogate mother. Furnish is a well known Canadian film maker, and was named by GQ as one of Britain’s best dressed men.

How Davido feeds his daughter… (Photo)

Top 10 Rappers with most expensive jewelry (With Pictures)